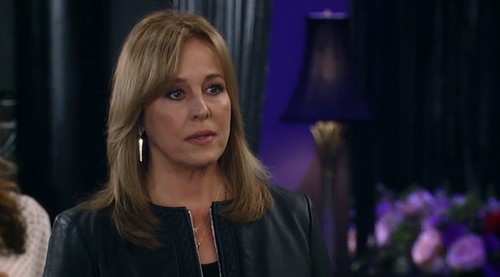 “General Hospital” spoilers tease that the week of June 8-12 will be another action-packed one in Port Charles, and according to GH rumors fans of the ABC soap will not want to miss a single episode. Laura Spencer’s (Genie Francis) arrival in Port Charles creates an uproar among some residents, meanwhile Nikolas Cassadine continues scheming to take over ELQ as the Quartermaines are distracted – but someone may be on to him and Rosalie. According to “General Hospital” spoilers, this is what fans can expect to see during the week of June 8:

Monday, June 8: “General Hospital” spoilers tease that on Monday June 8 Luke Spencer continues his speech at the engagement party – and he reportedly makes an announcement that no one saw coming. Meanwhile across town, Morgan (Bryan Craig) is in a sticky situation and Detective Sloane (Grayson McCouch) is upset over news that Anna Devane (Finola Hughes) has shared with him.

Tuesday, June 9: GH spoilers indicate that on Tuesday’s episode of the ABC soap fans can expect another war of words between Franco (Roger Howarth) and Nina (Michelle Stafford) as he continues to pressure her to annul her marriage to Ric Lansing (Rick Hearst). Nina’s brother Nathan (Ryan Paevey) is as upset as Franco over the ordeal, and Maxie gives him a shoulder to cry on. “General Hospital” spoilers also tease that on June 9 fans can expect to see Nikolas Cassadine (Tyler Christopher) and Rosalie continuing to scheme to take over ELQ.

Wednesday, June 10: “General Hospital” spoilers and news for June 10 reveal that GH fans will get to see Rosalie (Linda Tovar) in some hot water because Sabrina (Teresa Castillo) is growing suspicious of her and thinks that she is up to something at ELQ. Meanwhile, Detective Sloane pays Nikolas a visit and has an interesting request for him.

Thursday, June 11: Elizabeth (Rebecca Herbst) grows nervous and begins to panic when a situation with Jake (Billy Miller) arises, “General Hospital” rumors hint that Liz’s lies could come crashing down sooner rather than later. Spoilers also tease that on June 11 Jordan’s (Vinessa Antoine) son TJ finds himself in a bit of trouble.

Friday, June 12: “General Hospital” spoilers reveal that Friday’s episode of the ABC soap will be an exciting one, Nikolas is reunited with someone he loves. Meanwhile, Lulu (Emme Rylan) and her father Luke Spencer (Anthony Geary) have a heated confrontation – and Luke has some explaining to do. Spoilers also indicate that Tracy (Jane Elliot) will find an unexpected ally in Sabrina, and the duo do some bonding.

GH fans, are you as excited as we are for all of the drama? DO you think Sabrin will expose Rosalie and Nikolas? What are Lulu and Luke fighting over. How will he react to Laura’s return? Who does Nikolas Cassadine share a reunion with on Friday? Let us know what you think in the comments below and don’t forget to check CDL tomorrow for more “General Hospital” spoilers and news.