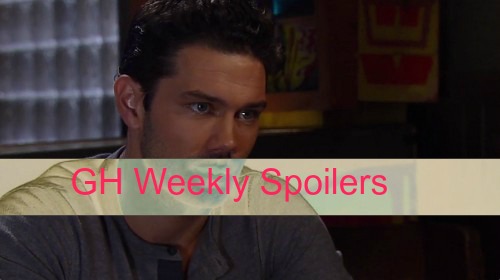 Here’s a look ahead at next week’s Port Charles intrigue with these “General Hospital” spoilers for Monday October 5 through Friday October 9. This week, with things calming down and Julian Jerome (William deVry) hopefully now not a target of the Corinthos syndicate, he has stress-free time to spend with Alexis Davis (Nancy Lee Grahn). Julian moves out of the penthouse to leave it to Ava Jerome (Maura West) and it looks like Alexis and Julian may be ready to settle down together as long as he can stay out of the mob.

Tracy Quartermaine (Jane Elliot) tries to have a chat with Michael Quartermaine (Chad Duell) about the change in career she’s seeing with him now fronting the Corinthos syndicate. Michael sees it as him doing what he has to do, but Tracy sees it as him following in the footsteps of Sonny Corinthos (Maurice Benard) and that upsets her since Sonny killed AJ.

Tracy enlists Paul Hornsby (Richard Burgi) to try and get Michael to see reason, but Paul is not her ally in this like she thinks. Paul may want Michael running the syndicate while living under the same roof as him so he can keep his eye on what plans Michael has for Sonny’s mob so he can undermine Michael and help out the Jerome syndicate with inside info.

Later, Tracy hears Paul on a suspicious call and confronts him and they argue. Was Paul talking to Mayor Lomax (Saidah Ekulona) or one of his other partners in the Port Charles widespread syndicate? In other news about Michael, Felix DuBois (Marc Samuel) comes to see Sabrina Santiago (Teresa Castillo) and they talk about Michael’s new business endeavor.

Sabrina is concerned about Michael being involved in the mob, especially now that she’s pregnant! Felix and Sabrina chat about all of this – Sabrina is not comfortable with Michael being in the mob, particularly since Carlos Rivera (Jeffrey Vincent Parise) was in the business and has disappeared. Sabrina asks Anna Devane (Finola Hughes) about Carlos but gets nothing.

Jake Doe (Billy Miller) tells Liz Webber (Rebecca Herbst) about the talk he had with Sam Morgan (Kelly Monaco) on her anniversary and Liz doesn’t like it. Jake tells her that Sam said if Jason was alive he would have tried to get to her and Liz knows that he did try but was hit by a car, but still she says nothing. Liz gets a call that makes her uncomfortable.

Was it Laura Spencer (Genie Francis) calling Liz to pressure her to come clean? Laura was just at Sam and Patrick Drake’s (Jason Thompson) and heard about the engagement. Laura did intend to tell Sam the truth then decided not to, but will read Liz the riot act for letting Sam marry someone else and herself try to marry Jake when she knows they’re already married.

Jake wants to know why Liz is so upset by the call. Liz doesn’t tell him the truth and Jake realizes she’s hiding something from him. Jake decides to act on his suspicions and pulls Sam into the deal to talk over what’s going on – and figure out who Liz was talking to and what it was about. Figuring this out throws Sam and Jake together and in some danger. That’s no good.

Anna feels guilty after Sabrina grilled her on Carlos then granddaughter Emma Drake (Brooklyn Rae Silzer) tells her she’s great. Anna feels like crap about the turn her life has taken. Later, Sam and Anna have a sit down to chat with Emma. Is it about Sam and Patrick’s engagement? Will Sam reassure Emma that she’ll be there for good? That won’t work out – once Jake is revealed.

Laura is going to keep pushing until the truth comes out about Jake and decides to push on Jake himself to try and shake some memories loose. Laura tells Jake there’s no way he should walk down the aisle with Liz until he knows who he is. Will Laura tell him outright that he may have a wife somewhere and that he could be committing a crime by getting married?

Laura has a chat with son Nikolas Cassadine (Tyler Christopher) about Jake and how this is spiraling. She tells him about Liz and Jake’s and Sam and Patrick’s wedding and how she can’t believe he’s going to let this happen. Hayden Barnes (Rebecca Budig) will overhear this and will realize Jake is Jason. But looks like Nik may catch her at spying and have a confrontation.

Franco (Roger Howarth) wants to protect Kiki Jerome (Hayley Erin) and starts by fending off Lotharios hitting on her at The Floating Rib and says that he’s her dad. That shocks he and Kiki and then later, Kiki has it out with mom Ava who wants Kiki back now that she’s got Avery back so her life will be perfect. Kiki is not interested.

Carly Corinthos (Laura Wright) pleads with Sonny to fight for his life, but it looks touch and go. Dante Falconeri (Dominic Zamprogna) talk about their future – a future that may never happen once Dillon Quartermaine (Robert Palmer Watkins) is done. Dillon acts on advice from dad Paul and confesses to Lulu that he loves her.

Nathan West (Ryan Paevey) makes a big assumption that could put his life in danger. Dante’s mom Olivia Falconeri (Lisa LoCicero) tries to figure out how to bring baby Leo back to Port Charles but keep him from Julian.

All this drama plus so much more this week in Port Charles. Come back to CDL daily for more “General Hospital” spoilers, gossip and more!