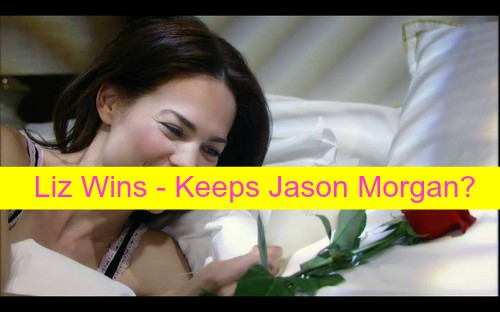 “General Hospital” (GH) spoilers indicate that the the big Liz and Jake wedding day outcome may not be what fans are expecting – or what most of them want. Many fans are eagerly awaiting the big comeuppance they anticipate for Liz Webber (Rebecca Herbst) once Jake Doe (Billy Miler) finds out his identity as Jason Morgan and figures out that Liz has been lying to him for months.

But remember this – Jake doesn’t remember his relationship with Sam Morgan (Kelly Monaco) at all. And he does have genuine affection for Liz both as Jake and from before as Jason. Sure most of us think that Liz deserves to be punished – and she does, to some extent. But despite the lies over the past few months, is there a chance that she also deserves to keep Jason with her for good?

Let’s consider. First, Liz was drawn to Jake from the start, even when he was swaddled in bandages and she didn’t know who he was. When Jason was brought into the ER all banged up from being run over, Liz helped bring him back to life.

Second, remember this was not the first time Liz saved him. Back in 1999, Liz found Jason gunshot in the snow and saved his life – and he saved her on more than one occasion.

These two keep circling back to one another. When Jake woke after his reconstructive surgery, the first thing he said was “Elizabeth” and Jason’s first memory flash was of Liz as well. He also picked the name Jake for himself because he remembered Liz telling him that he was Jake’s father. Then, just the other night on the bridge, Jake said he had a memory of being there with Liz and kissed her again.

That was just after Jason saw Sam with John McBain (Michael Easton) and kissed Liz for comfort then told her he never wanted to hurt her. Of the two, Sam and Liz, you also have to admit that Liz has gone to great lengths to display her love for Jason.

And most of the memories that Jake has recovered have been of Liz, not Sam. Jake stood at a vow renewal with Sam and didn’t get even a tingle of affection…

Could these be signs that it’s Liz Jake is destined to be with? Can you imagine how that would turn Port Charles on its ear – particularly after Sam dumps Patrick Drake (Jason Thompson) in the wake of the ‘Jake is Jason’ reveal?

Liz is all that Jake remembers and he loves her really bad right now. Jake has no feelings for Sam and even when he finds out what his real name is, don’t expect a total recall.

Don’t look for Jake to summarily dump Liz right after the reveal for a number of reasons – even though it’s what fans seem to want and expect. First, Jake won’t know right away that Liz knows his true identity – that’s another reveal that could come sooner or much later.

Second, Jake knows Liz’s boys are relying on him and that one of them is his biological child. Third, Jake thinks Sam is committed to Patrick.

Finally, Jake is not Jason. Sure Jason loves Sam, but Jake loves Liz. Jake is not the Jason that fell for Sam. He’s more like the Jason Quartermaine of old and may no longer be a fit for her. In fact, this dilemma is what may stun many of those closest to Jason and Jake.

He’ll also no longer be the man who will act as an enforcer for Sonny Corinthos (Maurice Benard) and will be better off with the Quartermaines.

With this story firmly in the hands of new writers Jean Passanante and Shelly Altman, what we do know by now is to expect the unexpected. They seem to like shaking things up and have derailed many plotlines that Ron Carlivati was churning.

They killed off the Valerie Spencer (Brytni Sarpi) pregnancy and seem to have dropped the Morgan Corinthos (Bryan Craig) bipolar plot.

There’s no telling what Altman and Passanante have in store for Jake. So whatever you do, don’t count Liz out of this. She wants Jake and has proven her love – she may yet walk away with the prize, no matter what Sam thinks – or the fans. Stay tuned to CDL for more “General Hospital” spoilers on the Jake reveal plus other gossip and more!