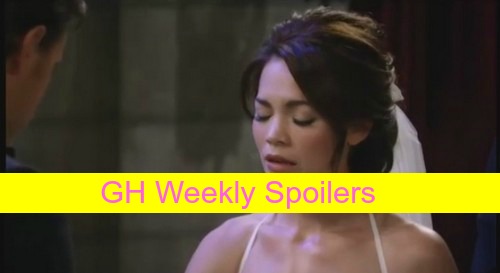 These “General Hospital” (GH) spoilers cover the Monday, November 9 through Friday, November 13 episodes. Finally the pace picks up this week – we’ll see lots of movement on #JasonRevealed and a nuclear blow up at the baby Avery custody case.

First, let’s look at non-Jake happenings… Lulu Spencer (Emme Rylan) is reeling from the revelation that Dante Falconeri (Dominic Zamprogna) cheated. She will run into Dillon Quartermaine (Robert Palmer Watkins) who will further infuriate her.

Dillon says again that Dante isn’t worthy and that will set her off since she now knows Dillon was the one who publicly humiliated her by playing the video. Dillon loves her but Lulu is off of men right now it seems. Dante wants to work things out but Lulu isn’t interested. Rumor has it that Lulu will do something crazy – is she going to move forward with the embryo implantation anyway? Looks like she’ll keep her doctor’s appointment and may make a surprising choice.

Dillon talked to Maxie Jones (Kirsten Storms) – is the movie project off for good now? He encourages Maxie to pursue her dream of acting but she end up with a new and different job. Laura Spencer (Genie Francis) faces off with Dante after his cheating is revealed. She chews him out but then gives him some insight on giving Lulu some space to cool off before pushing for a reconciliation.

Unfortunately, Dante will be closer than ever to Valerie Spencer (Brytni Sarpi) because her new police duties will involve an assignment near to Dante and she still loves him. Valerie has a tough time at work – is Paul Hornsby (Richard Burgi) riding her butt because he knows about her cheating scandal?

Now for Jake! Jake Doe (Billy Miller) tells everyone he’s Jason Morgan and Carly Corinthos (Laura Wright) has the evidence to back it up so there’s no doubt in anyone’s mind. Liz Webber (Rebecca Herbst) is shocked he found out just before their wedding and Sam Morgan (Kelly Monaco) is just plain shocked.

Nikolas Cassadine (Tyler Christopher) gets a nasty surprise when Jason turns all his anger and frustration on him. Jason attacks him and tells everyone that Nikolas knew and was hiding his identity. Jason will have to be dragged off of Nikolas before he kills him. Not pretty… Sam and Jason will have an intense conversation and he has to tell her that he knows he’s her husband but doesn’t remember her.

Port Charles is stunned at the big revelation as word spreads about #JasonRevealed. Liz and Jason will also talk and he’ll reconfirm that he loves her and that’s what matters and she feels the same. Of course, he doesn’t know she’s been lying… Jason reels because he can’t remember anything about his past and it doesn’t mesh with his present.

How will big and little Jake Spencer (James Nigbor) react after the announcement? Little Jake should tell him he told him a week ago. But will little Jake tell him how he knew? Could he blow his mom’s lie up? Not now, maybe later. Sam and Patrick Drake (Jason Thompson) have to talk about what this means – it means they’re done because she’s married.

Sam goes to Alexis Davis (Nancy Lee Grahn) to fill her in and get her wise mom’s take on this mess. Patrick will call ex-wife Robin Scorpio (Kelly McCullough) to tell her that Jason is alive and in Port Charles. Did she already know?

If so, Patrick won’t like that. Liz goes to see Monica Quartermaine (Lesley Charleson) to tell her that she’s still got a son alive and Sonny Corinthos (Maurice Benard) will be stunned that his hero really was Jason back from the dead. That should cushion the blow of Carly bailing on the custody hearing. In light of mobster Jason’s return from the dead, Alexis and Julian Jerome (William deVry) talk about how his former cartel activities still impact his life now.

Hayden Barnes (Rebecca Budig) loved the drama at the wedding and can’t wait to create more. She drops a bombshell on Nikolas – does she tell him her memory is back and she knows everything? Or is she going to release this info in dribs and drabs?

There’s a liar’s summit later with Liz, Laura, Hayden and Nikolas in attendance to talk about where to go from here since all of the truth is not out yet. Liz wonders if she should throw herself on Jason’s mercy with the truth. Nikolas will, of course, encourage ongoing dishonesty. Hayden will reach out to her secret partner to check in and will talk about all of this mess. What is Hayden up to?

The custody case is just nasty. Ava Jerome (Maura West) takes Paul’s advice to provoke Sonny and she will and it will cause him to go off like a maniac in court, but that’s just the opening act of the show. Sonny thinks he’s in good shape because he has a pile of witnesses but then Scotty Baldwin (Kin Shriner) starts to rip them all apart.

Michael Quartermaine (Chad Duell) will no doubt be asked about Sonny murdering his father AJ and their estrangement. And Morgan Corinthos (Bryan Craig) will be crucified for all of his poor choices – Scotty may bring up the affair with Ava proactively to take the teeth out of it. Wouldn’t it be fun if the nastiness results in a joint custody ruling because the judge thinks they’re equally awful?

Emma Drake (Brooklyn Rae Silzer) hangs out at the park with Spencer Cassadine (Nicolas Bechtel) for a school project and it looks like Emma could be in danger. Is Paul lurking to make trouble and scare Anna Devane (Finola Hughes) or is the lurker actually her mom? Robin should be back soon, right? Anna and Paul will have another face off after she nearly catches him canoodling with Ava.

She tells him to stay away from Emma. They will have a showdown again later because he wants her to slow her roll on investigating Sonny’s shooting, but since she’s a private PI, he can’t do much about it but make threats. Later, Paul and Dillon bond and his dad will reassure him that things will get better.

And finally – nutty Nina Clay (Michelle Stafford) decides she needs to have purpose in her life and wants a job. She gets an interview, but where and doing what? Ava might hire her at the gallery since she knows fancy stuff like art.

She could be a fashion blogger for the Port Charles paper. But anything practical like office work seems preposterous. This will be fun to watch. Nina’s storyline will lighten up what’s a heavy week of relationship drama for most of the other characters.

All this and so much more in a busy week in Port Charles. Check back with CDL for detailed daily “General Hospital” spoilers, casting news and more.