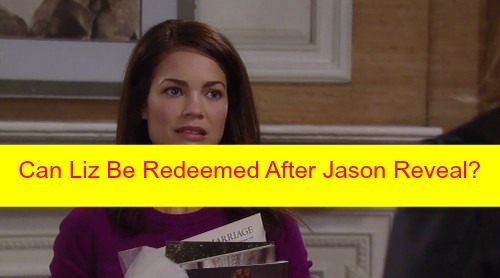 Today’s “General Hospital” spoilers considers what fate Liz faces once Jake Doe (Billy Miller) is revealed as Jason Morgan, whether she can be redeemed, and how it could happen. Liz Webber (Rebecca Herbst) is on borrowed time. First let’s consider the depth of Liz’s betrayal to understand exactly what it is she’s got to come back from and who needs to forgive her.

Liz has kept Jake away from his wife Sam Morgan (Kelly Monaco) which allowed Sam and Patrick Drake (Jason Thompson) to fall in love, get engaged, and for Danny and Emma to get attached to each other and form a family unit. Liz has also kept Jake from the Quartermaines. Monica Quartermaine (Leslie Charleson) thinks all her children are dead and Sonny Corinthos (Maurice Benard) thinks his BFF is gone.

Carly Corinthos (Laura Wright) is also missing BFF Jason and Morgan Corinthos (Bryan Craig) is missing his namesake Uncle. Plus Michael Quartermaine (Chad Duell) had a sincere bond with Jason from years of affection. The Spencers and Qs will all be stunned at the big reveal. Hayden Barnes (Rebecca Budig) was betrayed by Liz and Nikolas Cassadine (Tyler Christopher) plus she was almost killed over the secret.

Duke Lavery (Ian Buchanan) may not have died if Jason had been around as Sonny’s second which means Ana Devane (Finola Hughes) would not have murdered Carlos Rivera (Jeffrey Vincent Parise). Ric Lansing (Rick Hearst) would not have hired Hayden and so would not have been humiliated by Carly at the Nurse’s Ball and then would not have ended up with Nina Clay (Michelle Stafford).

That led him to Madeline Reeves (Donna Mills) and Silas Clay’s (Michael Easton) eventual murder that might also not have happened. That’s two deaths that can be linked to this mess. You know the saying about a butterfly flapping its wings in Central Park and it raining in Shanghai? The butterfly effect says one small change effects countless other things in a series of ripples. It’s like that with Liz’s actions.

All of this will blow up in Liz’s face on November 6 at her wedding to Jake that, if it went down, would make her and Jake both bigamists. We know the wedding won’t make it to the “man and wife” stage, but will get far too close for comfort. Once this all comes out, how can Liz face the citizens of Port Charles again? How can she go to work and look Patrick in the eye?

How can Liz see patients at the hospital who hate her for lying to them for a year? How can Liz run into other parents at school when she betrayed them? How can she show her face anywhere at GH or around Port Charles? Redemption is tough as a concept and tougher still as a reality. The first step is to acknowledge what she’s done and take her lumps, come what may.

This is the first area Liz will struggle. She will be tempted to blame it all on Nikolas and play innocent bystander, but that won’t stick and is not the path to redeeming herself in the eyes of Port Charles. Liz needs to go to each and every person, admit she was wrong, and say she’s sorry. She needs to come clean fully and says she is selfish and that her only defense is that she was blinded by her love for Jake.

What will be key to Liz’s redemption is for the other three key players in this drama to forgive her. That’s Jason, Sam and Patrick. If she can get them to accept her mea culpa, the rest of Port Charles will have to follow suit. Jake will likely be the easiest to forgive since he’s more of an easy going guy at heart and doesn’t want to hate the mother of his child. Sam will be a much harder sell.

Sam and Liz have a long-standing rivalry and Liz stealing away her husband is a huge slap in the face. Plus, Liz has put Sam in the unenviable position of breaking either Patrick or Jason’s heart by who she decides to keep. Plus, since Jake has no memory of Sam, there’s always the chance that he will tell her to stay with Patrick which could crush Sam utterly. Liz is going to have to beg for Sam’s forgiveness.

Patrick will be a hard sell too since he’s an honest and decent person to the core who thought that Liz was a true friend when she’s been working against him for a long time. Patrick will have to tell Emma Drake (Brooklyn Rae Silzer) that she’s losing another mom which will crush them both. For that reason alone, Patrick will be a long time coming round to forgiving Liz.

When all of this comes out, for at least a while, we’re going to see Liz left friendless, loveless and the most hated person in Port Charles. The sole person who might be left talking to her is Ric and maybe Dr Liesl Obrecht (Kathleen Gati) who will applaud Liz’s deep rooted scheming. Unless Liz packs up and moves away from Port Charles, she’s must find a way to redeem herself – starting November 7.

What do you think? Can Liz be redeemed or is she too far gone? Should Liz give up on any pretense of being a decent person and just embrace the dark side? We’ll keep you posted with plenty of “General Hospital” spoilers as the big moment of Jake’s reveal nears and all the fallout when it does from Liz’s betrayal of those Jason loves and that love him.