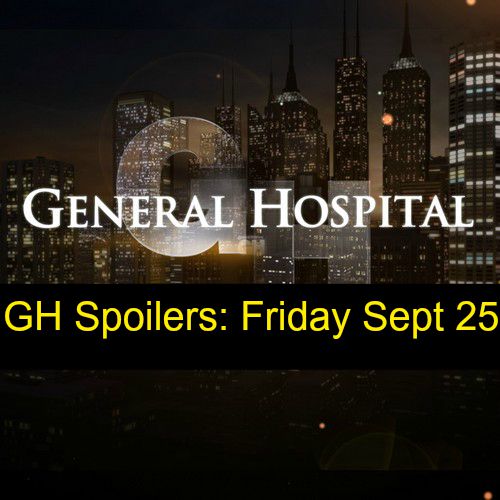 Here’s some “General Hospital” spoilers to get you ready for the Friday, September 25 episode. It’s cliffhanger Friday – what will GH leave us with this week? Sam Morgan (Kelly Monaco) is at Noodle Buddha with her precious figurines and, of course, runs into Jake Doe (Billy Miller) on their fourth wedding anniversary – but both are clueless they’re together on their big day. Being with Sam, plus the restaurant, and the dragon and phoenix spark a memory in Jake that may send him reeling. Liz Webber (Rebecca Herbst) will be concerned that Jake was bonding with Sam on what she clearly knows is their anniversary.

While Sam and Jake hang out, Liz and Patrick Drake (Jason Thompson) talk. Patrick is concerned because Sam didn’t say yes right away to his proposal. He frets to Liz that Sam might not feel for him like he feels about her. It’s in Liz’s best interests for Patrick to stay with Sam so she encourages him that it’s not what he thinks and says she can tell Sam really cares about him. Liz will pump him up because she would love those two to get hitched so she can feel less guilty about stealing Jake.

The good news for Liz and Patrick is that Sam’s soul searching will lead her to accept the proposal and finally let Jason go because she accepts that she needs to move on. Also at GH today is some Corinthos family drama. But first, anyone notice that Michael Quartermaine (Chad Duell) is all in black? He’s not in his usual pastel shirts, but head-to-toe black – like he’s channeling Sonny Corinthos (Maurice Benard) or Jason’s monochromatic dark wardrobe.

Rat fink Ric Lansing (Rick Hearst) comes to the hospital and wants to see Sonny. Michael shuts down his uncle and won’t give him access to Sonny. Ric says he needs to talk business and Michael tells him to talk to him since he’s taking over while his dad is out of commission. Ric protests that he should be handling things since he knows the business but no one will accept his authority, least of all Michael who backs Ric down and sends him scuttling off.

Carly Corinthos (Laura Wright) has to break the news to Sonny about the custody ruling that Ava Jerome (Maura West) obtained. Sonny will be devastated – this is the second time he’s losing his daughter. Will Michael try to step up and use his Q influence to change the custody ruling. Carly makes a big move of her own – what could she do to try and keep Avery in her hands? Could Carly propose a quickie hospital wedding to give her some legal standing?

Ava is excited about getting her daughter back, but less excited when she runs into Paul Hornsby (Richard Burgi) at the docks. Paul has some mob marching orders for Ava – does he wants her to make a move against the Corinthos syndicate while Paul thinks they’re weak because Sonny is in the hospital? Paul can threaten to reverse the custody ruling if Ava doesn’t cooperate so she has no choice and then we’ll see Ava do something outlandish.

Alexis Davis (Nancy Lee Grahn) is confident that she made some headway with Paul and tells Julian Jerome (William deVry) that Paul will help her shut down the court case and will find who’s responsible. Alexis also tells Julian that Sonny and the other Corinthos family members will realize that he wasn’t involved. Julian isn’t willing to rely on the cops or a change of heart by the other mob peeps. Julian’s vested his hopes in Sam finding the answers he needs.

After Friday’s cliffhanger show, check back with CDL for more “General Hospital” spoilers, gossip and more.