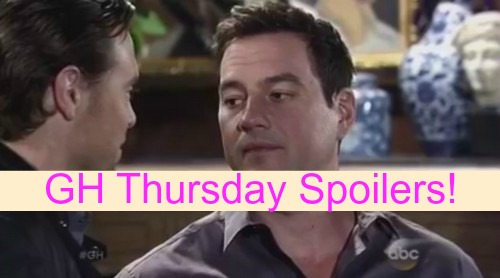 These “General Hospital” (GH) spoilers for the Thursday, November 12 show reveal the aftershocks quaking Port Charles and other storyline drama. The fallout from the reveal is still going on! Liz Webber (Rebecca Herbst) is upset that Sam Morgan (Kelly Monaco) showed up at her house last night to drop off Jason Morgan’s (Billy Miller) motorcycle and invite him to visit Danny.

Liz will see this as Sam not waiting a moment before invading her turf to try and take her man. As far as Liz is concerned, Jason is with her since he doesn’t remember Sam and his wife needs to back off.

To push this agenda, Liz tells Patrick Drake (Jason Thompson) that he needs to keep Sam away from Jason and things will be fine for both of them. But Patrick sees the writing on the wall even if Liz is still in denial. Will Patrick tell her that if Jason recovers his memory, both he and Liz will likely be relationship roadkill? Don’t expect Liz to go down without a fight! She wants to keep Jason at all costs.

Sam consults Alexis Davis (Nancy Lee Grahn) about the legality of her relationship with Jason. Since Jason was legally “dead”, is she still a widow and is their marriage a thing of the past? If Alexis tells Sam that Jason is still her husband, it will arm Sam with ammunition against Liz. After all, if Jason is her husband, it seems like Sam could show up and take him home with her like a lost dog, right?

Sam and Patrick will have an uncomfortable chat later. Does what Alexis tells her play into this conversation? Will Sam pack her bags and go or will she wait to see if Jason gets his memories back? And is Patrick willing to play second fiddle and hope for scraps from Sam or will he call time of death on their engagement? Patrick will phone Robin Drake (Kimberly McCullough) this week to talk this out.

Jason has to reveal his identity to someone else important in his life – little Jake Spencer (James Nigbor). He tells his son that his name is Jason and he really is his father. Will Jake tells Jason he already knew that? And if so, will little Jake say he knew it because of Helena Cassadine (Constance Towers) or because he heard his mommy and grandma Laura Spencer (Genie Francis) talking? Could be trouble!

Police commish Jordan Ashford (Vinessa Antoine) chats up Anna Devane (Finola Hughes) when she notices Anna is off her game. She wants to know what’s going on with her Brit buddy. Likely Anna will tell Jordan about Paul Hornsby’s (Richard Burgi) invite to be a police consultant. But then how much will Anna reveal to Jordan about her dirty laundry and Carlos Rivera (Jeffrey Vincent Parise)?

Also at the PCPD, Valerie Spencer (Brytni Sarpi) is now training to be a cop and she and Dante Falconeri (Dominic Zamprogna) talk about his imploding marriage. Valerie will advise him to give Lulu Spencer (Emme Rylan) some time to sort through things – while secretly hoping it doesn’t work out since Valerie loves Dante and wants him for herself.

Paul will hassle Valerie at work and then Val will get an assignment that will have her working side by side with Dante. Meanwhile, Lulu is giving in to her anger at Dante by making out with lovesick Dillon Quartermaine (Robert Palmer Watkins). How far will Lulu let this go? Will she stop before they do the deed? It seems like Lulu may check herself, but then again maybe not.

There’s a “General Hospital” rumor that Lulu will see Valerie and Dante looking close as they work and this will push her over the edge. So even if Lulu does put on the brakes in this initial encounter with Dillon, she might go back for seconds if she assumes Val and Dante are getting it on. Either way, looks like Lulu will shag Dillon soon which sparks several more concerns.

First, is Lulu already taking the pregnancy hormones in preparation for the embryo implantation? Second, if Lulu is taking fertility meds, could Dillon impregnate her? You never know with soaps about miracle pregnancies… Third, even if Lulu sleeps with Dillon – which looks like will happen – that doesn’t mean that Lulu will let him into her life. This looks like revenge sex, not romance.

However, Dillon could let it slip to Dante that he and Lulu slept together to drive a further wedge and perhaps send Dante back into Valerie’s waiting arms which would free Lulu up permanently for Dillon. And there’s still the embryo thing and another rumored doctor’s appointment for Lulu. Lots happening on this storyline. Later, Dillon and Paul will enjoy some father-son hang time and bond.

All this and more on Thursday’s GH – don’t miss a moment and come back to CDL for tons more “General Hospital” spoilers, gossip and news.