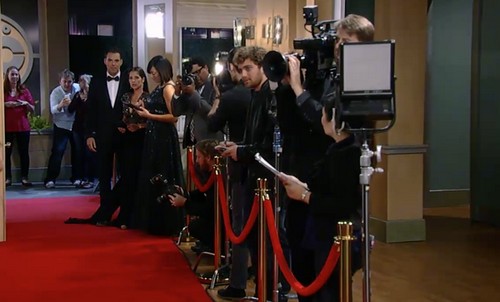 “General Hospital” spoilers tease that the week of May 4 – 8 will be must-see TV on the ABC soap and packed full of exciting drama as the 2015 Nurses Ball continues, rumor has it GH fans will not want to miss a single episode! Spoilers for the Nurses Ball tease some major revelations – but the fallout after the event is over will be just as huge. According to “General Hospital” spoilers, this is what fans can expect to see during the week of May 4.

Monday, May 4: “General Hospital” spoilers tease that Day #2 of the Nurses Ball will occur on Monday’s episode of the ABC soap – during the charity event Spencer Cassadine (Nicholas Bechtel) tries to make a move on his long-time crush Emma, but it winds up putting the youngster in serious danger. Meanwhile, Soap Opera Digest teases that Lucy Coe (Lynn Herring) will “blindside Anna (Finola Hughes) and Duke (Ian Buchanan).”

Tuesday, May 5: According to GH spoilers, Tuesday May 5 will be the final day of the Nurses Ball, and fans will not want to miss all of the excitement! While Spencer Cassadine gets some advice on his love life, Elizabeth’s (Rebecca Herbst) love life takes an unexpected turn when she makes a huge decision – we’re going to go out on a limb here and assume it has to do with Jason Morgan (Billy Miller).

Wednesday, May 6: “General Hospital” spoilers for Wednesday May 5 tease that GH fans can expect to see Hayden (Rebecca Budig) blackmailing Nikolas Cassadine (Tyler Christopher) – rumor has it that she will threaten to expose the fact that he knew about Jason Morgan’s identity all along. Meanwhile, across town, Sam (Kelly Monaco) has a tough time keeping a huge secret, and Anna and Duke spill the beans and make a shocking confession.

Thursday, May 7: Thursday’s episode of the ABC soap will find the mob wars heating up in Port Charles. According to “General Hospital” spoilers, TJ’s mom Jordan (Vinessa Antoine) is in serious dangerous. In other GH news, Olivia Falconeri (Lisa LoCicero) goes in to labor, and Jason Morgan makes a disturbing discovery.

Friday, May 8: “General Hospital” spoilers for Friday’s episode of the daytime drama reveal that Sabrina and Michael (Chad Duell) have a long talk about their relationship and their future as a couple – but it could all be for nothing because afterwards Sabrina (Theresa Castillo) receives an unexpected visitor. Meanwhile, across town, Anna Devane and Detective Sloane make a shocking discovery that will have a major impact on several lives.

So GH fans, are you as excited as we are to see the rest of the 2015 Nurses Ball? What decision does Elizabeth make – do she and Jason have a future together? Will Olivia’s birth go off without a hitch? Could Jordan Ashbury be killed off this week? What do you think Hayden wants from Nik in exchange for keeping his secret? Let us know what you think in the comments below and don’t forget to check CDL tomorrow for more “General Hospital” spoilers and news.