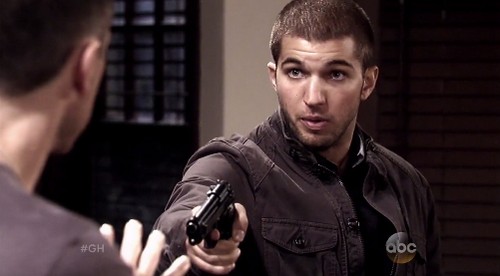 Check out these “General Hospital” spoilers to get you ready for the September 18 episode. It’s GH cliffhanger Friday in Port Charles. It’s Patrick Drake’s (Jason Thompson) birthday and Sam Morgan (Kelly Monaco), Emma Drake (Brooklyn Rae Silzer) and Anna Devane (Finola Hughes) have a surprise party set up for the weary surgeon. Patrick saved Sonny Corinthos’ (Maurice Benard) life and now he gets cake. Patrick is touched by Sam’s efforts for his b-day and then he surprises her. Will Patrick finally, finally pop the question?

Dillon Quartermaine (Robert Palmer Watkins) sees his movie derailed and he and his leading lady Maxie Jones (Kirsten Storms) go to the Q house to talk to Tracy Quartermaine (Jane Elliot) and Paul Hornsby (Richard Burgi) about their movie problems. Look for Paul to step up in a big way and get in touch with some movers and shakers to make things right for his son.

Scotty Baldwin (Kin Shriner) was happy about his $5 million payday for selling the flash drive to a jail-free Ava Jerome (Maura West). But when they find his suite at the MetroCourt has been tossed, panic sets in. Who took it? Was it Franco (Roger Howarth) still trying to help out? Ava gets a surprise visitor that wants to help her. Is it the person that tossed the room and stole the evidence?

Meanwhile, thinks aren’t looking good for Ava’s brother. Julian Jerome (William deVry) wants Alexis Davis (Nancy Lee Grahn) to leave town with him until things settle down and it’s safer, but Alexis tells him she’s not in danger since Sonny would never hurt her. Yet danger lurks nearby in the form of Morgan Corinthos (Bryan Craig). He’s outside Julian’s penthouse with gun in hand.

Morgan will burst in ready to take out the mobster he’s sure shot his dad, but will Morgan end up taking a bullet instead? We saw that Julian was loading his gun just before Alexis showed up. Will Julian have to shoot in self-defense? Rumor has it that Morgan would land in the hospital with his dad – will he take a bullet and that’s how it all goes down?

Sonny is awake and remembers Morgan telling him that he was going to kill Julian for doing this. Sonny warns Michael Quartermaine (Chad Duell) that he thinks Morgan is going to do something stupid. Carly Corinthos (Laura Wright) notices her youngest son is missing and the Corinthos family goes into panic mode to try and find Morgan and stop himself before he gets himself hurt.

By day’s end, looks like Morgan will be in a hospital bed, either on a psych hold for his erratic and increasingly violent behavior or because he was shot. And, here’s a terrible notion – what if Ava shows up and has to take a shot at Morgan to save her brother? Or what if Morgan accidentally shoots Ava when he’s gunning for her brother? There have been rumors of an Ava shooting too. Don’t miss it! Be sure to check back with CDL for daily “General Hospital” spoilers, gossip and more.