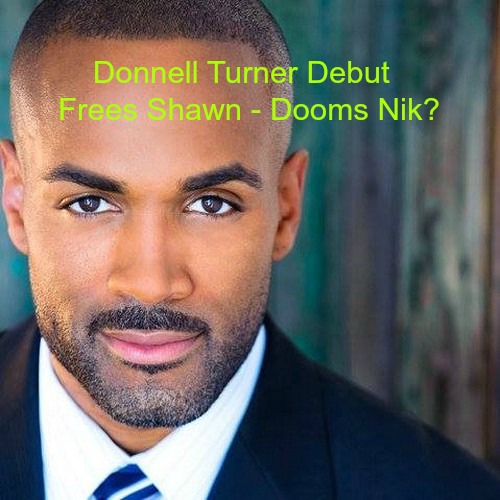 “General Hospital” (GH) spoilers reveal that Hayden Barnes (Rebecca Budig) is not letting go of her suspicions regarding her shooting and Shawn Butler (Sean Blakemore) is now her ally in the pursuit of truth. To help ferret out the facts – and clear his name – Shawn has found in Hayden a partner in crime. “General Hospital” casting news reveals that hotty Donnell Turner will share some screen time with Hayden playing a new character called ‘Curtis.’

We must assume that Curtis is an underworld buddy of Shawn’s who knows the mean streets of Port Charles. Hayden is certain that the bullet that went into her brain did not come from Shawn’s gun but from a third party.

Shawn is relieved he didn’t shoot an innocent woman – Lord knows he’s shot plenty of mobsters, but the idea of taking an innocent life obviously bothers him. Shawn’s pal Curtis will check out the garage to look for Shawn’s bullet, which should have gone astray.

If Curtis can find the bullet and get the PCPD to acknowledge it, Shawn might get a ticket out of Pentonville. This would open up future appearances for Shawn if he’s exonerated to do some scenes with his son TJ Ashford (Tequan Richmond) whom he just found out was his biological kid right before he went to prison.

Of course, Sean Blakemore is now on CSI Cyber, but that doesn’t mean he might now have time to show up now and again in Port Charles to see his son or Sonny Corinthos (Maurice Benard).

New cast member Donnell Turner has had guest roles on The Young and the Restless, How to Get Away with Murder and The Mindy Project. Turner revealed on Twitter that he inked a contract with General Hospital and we know that his first on-screen scene will air on November 30.

What we also know is that Curtis has a shady past and will work closely with Hayden who’s pretty shady herself. We’re also wondering is if Hayden and Curtis might get close up and sexy.

And once Hayden finds out Nikolas Cassadine (Tyler Christopher), her would-be honey, is the one who put out a hit on her, she might end up in Curtis’s arms and working with him to get revenge on Nik for her shooting. Congratulations to Donnell Turner on this GH new role – we can’t wait to see him skulking around Port Charles with hellcat Hayden! Stay tuned to CDL for more “General Hospital” spoilers, casting news and more!