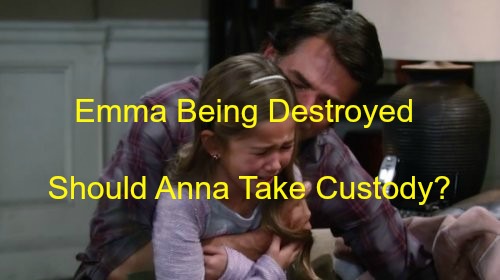 “General Hospital” (GH) spoilers tease that Patrick Drake (Jason Thompson) may have finally broken his daughter Emma Drake (Brooklyn Rae Silzer) with this latest bad romance. Should Anna Devane (Finola Hughes) take custody of her granddaughter to get her away from Patrick’s disastrous love life?

Poor Emma Drake broke our hearts when Patrick and Sam Morgan (Kelly Monaco) announced the break up. What was even worse was that Emma had come home early from a sleepover to help her dad and fiancée plan their wedding. Then BAM!

(By the way, Silzer’s performance was incredible – that kid is only 9! She cried convincingly and the dialog written for the scene was perfect.)

She was so sad, then Emma got angry at Sam’s protestations that she still loved her and lashed out at the ex-fiancée. How sad was it when Emma said, “Don’t say you love me…” then yelled at Sam, “If you’re going to leave, then do it.”

Then she bawled in her dad’s arms, “It’s too hard.” Then when she got to call Robin Scorpio (Kimberly McCullough), her mom was facing death and tried to assure her of her love. Emma told her mom, “I don’t understand why people love each other and don’t stay together.”

All Emma heard was that her mom wasn’t coming home when she needed her and Emma asked, “If you love me, why can’t you just come home?” Then the call ended and Emma told her dad, “She said goodbye, like everybody else.”

This is a kid who’s very wise about the vagaries of love after what she’s been through. But really, isn’t Patrick’s turbulent love life a form of child abuse? It’s not to the level that Child Services would get involved, but it should be enough for Anna to step in.

Anna can take custody of Emma and shield her from further emotional abuse at the hands of her father. Of course, Patrick isn’t doing this on purpose, but the result is the same on Emma. He couldn’t stop Robin from leaving, but he should have seen through Britt Westbourne (Kelly Thiebaud).

Patrick allowed Britt to manipulate him into firing Sabrina Santiago (Teresa Castillo) as a sitter. That crushed Emma. Then the revelation that Britt had engineered a pregnancy devastated Emma further – she thought she was getting a little brother – she got nothing but heartbreak.

But then Sabrina helped her heal only to have Patrick reject Sabrina and crush Emma again. Then with Sam, Emma got another little brother in Danny only to have him taken away again. And that’s just been in the last couple of years.

Emma has had more heartache before the age of 10 then many have their whole lives. Patrick is a nice guy, but his poor judgment in women is traumatizing his daughter. With Patrick leaving Port Charles for good, many fans were hoping Emma, Patrick and Robin would leave as a family.

But it seems inevitable that Patrick and Robin will split again and Emma doesn’t need that. What’s more likely is that Patrick will leave Emma with Anna. And Anna will be a better long-term influence than Patrick, but it will kill Emma to be left behind.

So far, showrunners have insisted that Emma is not going anywhere even when Patrick exits. But Josslyn Jacks (Eden McCoy) was just SORAd, so… Let’s hope that Patrick’s exit is not a tool to do the same to Emma when her sad storyline is so compelling.

Anna may be devil-may-care in some ways, but she’s trying harder with Emma. Anna was a distant mother to Robin because of her WSB work and that may have set the stage for Robin to also be a mother who would leave her daughter for work.

But Anna is older, wiser, and knows she missed out on a lot with Robin and is trying to make it up by being a good granny to Emma. Anna is a better influence on Emma and not likely to get so involved with a man that she throws Emma under the emotional bus.

What do you think GH fans, want to see Emma with Anna? Or do you hope Patrick takes her with him when he leaves town? If Patrick plans to take her, should Anna put her foot down and fight for custody of her granddaughter?

Share your thoughts below then come back to CDL for more “General Hospital” spoilers, gossip and more!