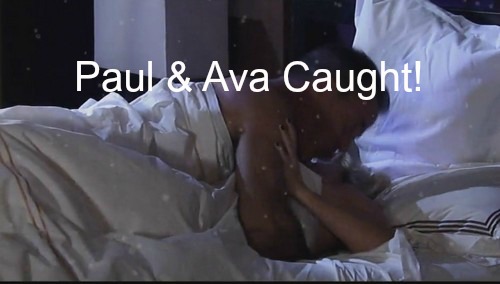 “General Hospital” (GH) spoilers reveal that the down and dirty side of Port Charles DA Paul Hornsby (Richard Burgi) will be found out Christmas week. Paul’s double dealings (and more) will be exposed when he’s caught in flagrante delicto with Ava Jerome (Maura West).

The problem with Paul is that he thinks he’s the chess master, maneuvering everyone around him like pawns. But his double-dealing lifestyle is about to come to an abrupt end when Tracy Quartermaine (Jane Elliot) walks in on him with Ava and realizes he’s been playing her for months.

Tracy was important to Paul’s plans because she gave an air of legitimacy to his presence in Port Charles. Not only is he the DA, but he’s associated with – and living with – the most prominent family in town. Too bad Tracy had to go and fall for that handsome rogue all over again.

So how does Paul get caught? In a word: carelessness. Ava sent a sexy pair of panties to the duplicitous DA – along with a MetroCourt hotel room key – just before he took the stage for his keynote speech at the Nutcracker Gala. That encouraged him to cut short his time at the podium.

Once he exited the stage, mob minx Ava called him up to give him the room number upstairs and, like a rube, Paul repeated it out loud. Paul son’s Dillon Quartermaine (Robert Palmer Watkins) overheard and he already has the idea in his mind that his parents are reconciling.

Remember Tracy just told Paul in the park that she’s falling for him all over again. Paul did not tell her the same, but Tracy made assumptions since he’s living under her roof and they’ve shared a moment here and there. Dillon will chat up his mom who will ask where Paul went.

Dillon thinks that his dad is setting up a romantic surprise for his mom, so he’ll share the hotel room number and Tracy will go looking for the sly silver fox. But it’s never a good idea to walk into a hotel room uninvited. Seems like if Paul wanted Tracy there, he would have asked her himself.

But up she goes, opens the door, and there’s her would-be honey on top of the most notorious woman in town – Ava! Tracy will be completely stunned and this will leave her questioning everything about Paul, including why he came to Port Charles to start with.

Paul can expect his bags to be packed and left on the front stoop of Casa Quartermaine – unless he can explain himself. This means Tracy will no longer be a beard to make him look like a better guy. The good news is, he can get a place of his own and see Ava when he wants and do his mob dealings.

But further bad news is, Anna Devane (Finola Hughes) is investigating Paul over a number of incidents. And Anna and Mac Scorpio (John J York) just talked about looking into his family life. They had dismissed talking to Tracy because they thought she was under his spell.

But once Anna finds out Tracy had kicked the dirty DA to the curb and goes to her, no doubt Tracy will be happy to help investigate her ex. It’s bad enough that Paul didn’t reciprocate Tracy’s feelings, but to take up with Ava adds insult to injury. And the Paul-Ava link may really interest Anna.

Ava will be thrilled that Paul has been ousted by Tracy and the Qs since she was jealous and thought he was shagging his ex-wife again. Paul can try and explain to Tracy that Av is just a cheap fling (which won’t go over well with Ava) but that likely won’t save him.

Paul is busted. And this single event may put him on a downward spiral to having his entire seedy lifestyle exposed – including his ties to the mob organization he’s working with and his involvement with Carlos Rivera (Jeffrey Vincent Parise) and the new gun runner in town.

Is this the beginning of the end for Paul? Will he have to shed his role as DA and come out of the closet publicly as Port Charles’ new big bad? What do you think GH fans – will Paul be able to make excuses and get Tracy to take him back or are they done for good?

Check back with CDL often for more “General Hospital” spoilers and news.