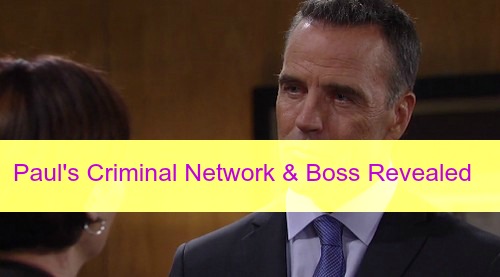 Now that we know Paul Hornsby (Richard Burgi) is GH’s new big bad, this “General Hospital” spoilers will lay out his criminal network, his plot to take over Port Charles and all of Hornsby’s many and various partners in crimes. We’re going to map out Paul Hornsby’s criminal network and figure out who’s really in charge and running the show.

If Paul’s plan to run the city seems too clever by far for the pretty boy lawyer to figure out, that’s because it is – he’s not the mastermind of the plan to prey on the populace of Port Charles. Think of Paul as the Chief Operations Officer of this criminal endeavor – but he answers to the CEO of true evil in this enterprise. But first, let’s look at who’s on the front lines…

Ava Jerome (Maura West) has a lot of skin in this crime game since she’s operating as the face of the Jerome crime syndicate. Ava will be tasked not only with furthering Paul’s criminal interests to advance the Jerome cartel, but also with expanding territory by taking on Sonny Corinthos (Maurice Benard) and his syndicate. Ava will also be the one to take the heat if anything goes wrong on the criminal front.

Also helping Paul, albeit unwittingly, will be Ava’s brother, Julian Jerome (William deVry). Even though Julian is well and truly out of the mob game, he’s not going to hang Ava out to dry if he can help it. Remember Julian runs the Port Charles Press newspaper and so can gear media coverage in favor of his sister and to make the Corinthos cartel look more culpable in any mob violence newspaper stories.

Nikolas Cassadine (Tyler Christopher) has yet to be revealed as one of Paul’s cronies in the Port Charles takeover, but is part of the master plan. This major criminal takeover is why Nikolas needed control of ELQ and went to such shady extremes to take it over. The Quartermaine corporation is the perfect front to launder all the ill-gotten booty that the super-charged Jerome enterprise will generate.

The ELQ money laundering plot is a throwback to the 90s when Paul married Tracy Quartermaine (Jane Elliot) to get control of the corporation to launder DVX cartel money. Paul certainly can’t take credit for that idea – that came from the original DVX members which included some old school legacy General Hospital big baddies – and some of those are likely still in the mix for this plot…

Next in the Hornsby hall of evil is Mayor Janice Lomax (Saidah Ekulona). Lomax was a dirty piece of work even before Paul came back to town and may, in fact, be part of the reason Paul is in Port Charles now. Lomax’s rigged election against Felicia Jones (Kristina Wagner) was likely the first salvo in this criminal master plan. But back then, we thought it was just Lomax, Nikolas and Kyle Sloane (Robb Derringer).

Lomax can make sure that the Jeromes aren’t the focus of police and prosecutorial probes and clear the path for the criminal network she’s helping to build. This also includes Lomax “appointing” Paul to the DA job. That was very likely a done deal and arranged before Paul even got to town. And it was probably Lomax that handed Paul the flash drive with the evidence against Ava to get that ball rolling.

Paul is able to act with impunity because of Lomax’s part in the plan – and his too since Paul doesn’t have to prosecute anyone he doesn’t want to and can focus on putting away Corinthos cartel members and let the Jerome henchmen – and Ava – run wild. So we’ve got the “legal” side of the team with Paul and Lomax and the “illegal” side of the team with Ava and Nikolas. But who’s really running the show?

There is a chance that Nikolas Cassadine is the big boss, but I’d give that about 10% probability. And Paul is definitely not the big cheese since we’ve heard him on the phone consulting with someone else who seemed to hold sway over him. If they’re going with a legacy character associated with the old DVX cartel, we may see Grant Putnam (Brian Patrick Clarke) or Cesar Faison (Anders Hove) in charge.

There’s also a chance that the big boss is a ruthless lady boss – Helena Cassadine (Constance Towers). She may be sick of her exile and making big power plays from Cassadine Island. However, since she and Nik are estranged and he’s the one who exiled her, it feels like she’s not an obvious choice as the boss. But there’s another Cassadine that could yet come into play – Valentin Cassadine.

There have been persistent “General Hospital” rumors that Valentin would be seen at long last in coming months. Valentin is reputed to be the absolute worst of all the Cassadines and is a son of Mikos Cassadine by an unknown woman making him Helena’s stepson and Nikolas’s uncle. Valentin is a likely candidate. This is the only question mark in Paul’s organization and one we won’t know for months.

Stay tuned to CDL for more “General Hospital” spoilers on the Paul Hornsby crime plot as things develop – and check with us for daily GH spoilers and more!