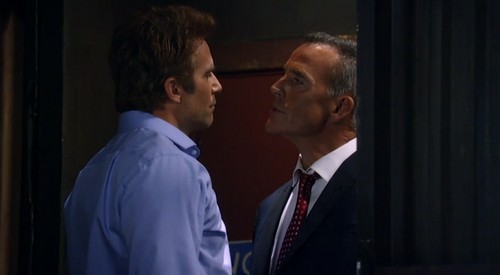 This “General Hospital” spoilers considers Port Charles’ newest crime boss Paul Hornsby (Richard Burgi) and who his partner or partners might be. What’s likely is there’s more than one squirrel acting behind the scenes with Paul in the bid to take over and rule the mob territory in Port Charles. If you dig up decades-old mob history on GH, you’ll remember Paul had ties with DVX.

Back in the 80s and early 90s, DVX was both a rival spy agency pitted against the WSB and a cartel in its own right. DVX had some nasty characters associated with it including Cesar Faison (Anders Hove), Leopold Taub (Charles Lucia), Larry Ashton (Hugo Napier), and Harlan Barrett (Michael Cole). Taub and Barrett are both deceased and the whole group has deep ties to Port Charles.

It was DVX that led to Paul’s marriage to Tracy – the intent was for Paul to access Tracy’s shares of ELQ to launder the cartel’s money through the company. This old news is important because it ties back to recent activities – with Nikolas Cassadine (Tyler Christopher) raiding ELQ and taking it over for reasons he won’t explain to anyone.

It seems obvious that Nikolas is in bed with Paul – metaphorically – and is one of the mystery partners that Paul has working with him behind the scenes in Port Charles. Nikolas having control of ELQ will allow them to launder Jerome syndicate money through ELQ with Ava Jerome (Maura West) the front woman for the syndicate.

But whomever Paul is talking to seems to be much more of a heavy hitter than Nikolas – we now know Mayor Lomax (Saidah Ekulona) is working with Paul, but the question remains who is the ultimate boss. Paul may also be working with Helena and Cesar who is still living as a fugitive. And, if Carlos Rivera (Jeffrey Vincent Parise) is by some chance alive – and there are hints that he is – he’s likely in the mix as well.

The ultimate plot looks like Ava will shoulder most of the risk on the mob front as the face of operations while she runs the syndicate with Paul as her backseat driver. Nikolas will also have skin in the game as he monitors money laundering through ELQ. Paul will keep the Jeromes out of trouble with the law and keep the PCPD focused on the Corinthos syndicate – with the backing of the Mayor.

This allows Ava to fight the Corinthos mob on the illegal side for territory and influence while Paul fights the Corinthos mob on the legal side making it hard for them to do business. It seems like a perfect plan and will work for a while, but will fall apart eventually. Michael is clever and could see that someone other than Ava is making decisions – and Jake Doe (Billy Miller) will help him find the truth.

Look to CDL for more “General Hospital” spoilers on Paul Hornsby and his evil plan for Port Charles soon!