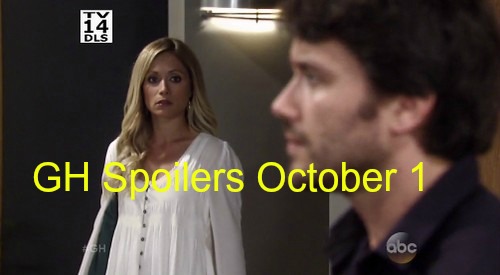 Here are some “General Hospital” spoilers for the Thursday, October 1 episode of the ABC soap. Avery’s custody is front and center today on GH. Morgan Corinthos (Bryan Craig) tried once already to talk Ava Jerome (Maura West) out of taking baby Avery by offering his body as a bribe. And today, when Ava shows up at the Corinthos house to demand her daughter on orders from the court, Morgan flat out tells her she can’t take the baby. Carly Corinthos (Laura Wright) joins in and tells Ava no way.

Will Ava have to call the cops on them? Will Michael Quartermaine (Chad Duell) be the voice of reason and tell his mom to hand Avery over now so they’re on the right side of the law and vow to retrieve his baby sister legally as soon as they can? Will rat fink Ric Lansing (Rick Hearst) get a last minute reprieve through the courts on the custody swap?

Personally, my money is on Ava because Carly is a well-known baby stealer. Remember Carly stole Michael from AJ and we see how well that turned out in the long run. Michael has profound daddy issues and AJ was murdered by Sonny Corinthos (Maurice Benard). Carly and Ava will get in a major showdown – let’s hope Ava gets her daughter back.

There’s also drama on the set of Dillon Quartermaine’s (Robert Palmer Watkins) movie and that’s before the cameras ever start rolling. Maxie Jones (Kirsten Storms) is ready for their sex scene, but first overhears Dillon talking about how he needs to get over someone. Of course he’s talking about his feelings for Lulu (Emme Rylan), but will Dillon confess he’s crushing on his ex to her BFF Maxie?

Or will Dillon say he’s reworking a scene for the movie and was running through a plot idea out loud? Dillon will have a confession for Maxie, but it will not be the full truth about his feelings for Lulu. That’s for later and with someone else. Lulu, meanwhile, wants to know why Valerie Spencer (Brytni Sarpi) can’t stop thinking about her husband Dante Falconeri (Dominic Zamprogna).

Lulu overheard Val saying as much to Dante. Was Val about to tell Dante she loves him and is about to be his baby mama? That won’t matter because Lulu butts into their convo and Valerie has to scramble for excuses to avoid a blow-up outside Sonny’s hospital room. Val will make this about her concern for Dante since his dad may be on his deathbed and she just lost her mom. Will Lulu buy the cop out?

Speaking of cops – former cops, anyway – Anna Devane (Finola Hughes) wants answers about Sonny’s shooting since she knows it wasn’t Carlos Rivera (Jeffrey Vincent Parise). Anna will ask Sam Morgan (Kelly Monaco) to team up with her to find the real killer. Sam was already working that case at the behest of her dad Julian Jerome (William deVry), so will readily agree to the pairing.

Will this lead to a formal partnership and perhaps the birth of “Devane and Morgan, Private Investigators”? I would prefer their business be called “Two Sexy Detectives, LLC.” Their business venture may not last long, though, with Paul Hornsby (Richard Burgi) plotting against Anna. Rumor has it he may set Anna up for Kyle Sloane’s (Robb Derringer) murder. Paul does have her gun, so it’s possible.

Paul will not like that Anna is working at cross-purposes with him since he wants Carlos to be thought alive to use Rivera as a patsy for the Sonny shooting and possible future crimes. Before he launches his foul plan, Paul needs more info and calls in Nathan West (Ryan Paevey) to talk about Anna. Nathan thinks she’s the cat’s pajamas, but Paul is skeptical and tells Nathan to wise up.

Later, Nathan chats up Valerie who’s off-put by her exchange with Lulu at the hospital. Nathan advises Valerie to move on with Dillon, but she can’t and Nathan suspects that Valerie is hiding something more than just affection for his partner – perhaps she’s got a love child on board. What will Nathan do about these suspicions? Will he tell Dante? Maxie?

All this and more on today’s GH – don’t miss a moment then head back to CDL for more “General Hospital” spoilers, casting news, gossip and more!