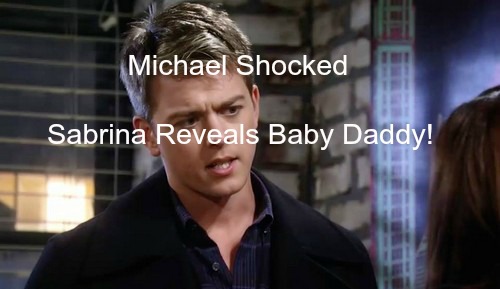 “General Hospital” (GH) spoilers reveal that Sabrina Santiago (Teresa Castillo) will finally come clean on the Monday, November 23 episode about the paternity of her unborn baby. Michael Quartermaine (Chad Duell) will be stunned, but what then?

Sabrina apparently has been hiding for quite some time that she was pregnant, and she’s known all along that it was Carlos Rivera’s (Jeffrey Vincent Parise) baby. You’ll recall that Sabrina slept with Carlos right before her first “official” date with Michael.

Then she and Michael waited a bit before they were intimate, so you have to wonder if Sabrina knew she was preggers with Carlos’ kid before she slept with Michael. If so, you really have to question her motives – and so could Michael.

Will Michael think she planned to trick him into thinking the baby was his, but then thought better of it? Will he assume the worst about her motivation for letting him believe the baby was his? In fact, Sabrina has never told him it was.

Sabrina said, “I’m pregnant” and Michael assumed the child was his because he knew she wasn’t dating anyone else. And although her baby daddy is dead, she didn’t know he was going to die when she slept with him.

Sabrina only knew that Carlos was leaving Port Charles – likely for good – so it was a farewell shag. She just didn’t know it was a permanent goodbye. Michael will have some questions for her, but will he explode first?

Michael has a pretty bad temper – and Lulu Spencer (Emme Rylan) warned Sabrina before that she’s yet to see his dangerous side. Remember this is a guy who bludgeoned a woman to death and took his father’s baby away to punish him.

Will Michael lash out at Sabrina? Will they even make it to Thanksgiving at the Quartermaines? Michael knows that everyone at the table will be talking about the baby, so he may not want to face that inquisition. But he may have to.

After all, since Jason Morgan (Billy Miller) will be there – now as an official Quartermaine – Michael won’t want to miss it. But will he want to bring Sabrina along now that he found out she’s been lying to him for weeks?

Will Michael table the discussion about the baby until after the holiday or will he dump Sabrina right after she confesses because he’s so angry? What Michael really needs to do is talk to Sonny Corinthos (Maurice Benard).

Michael is now in a position like Sonny was in back in the day when Carly Corinthos (Laura Wright) was preggers by AJ Quartermaine and Sonny agreed to raise Michael as his own. Even if Michael dumps Sabrina, Sonny may talk him down.

What’s likely to happen is that Michael will react badly at first then recognize that he’s been given a chance to pay back the gift that was given to him as a child when Sonny adopted him by raising Carlos’ son as his own.