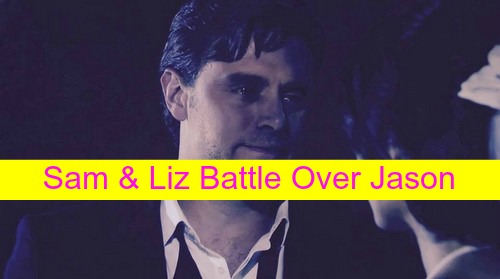 “General Hospital” (GH) spoilers indicate that both Liz Webber (Rebecca Herbst) and Sam Morgan (Kelly Monaco) are squaring off to fight for the man they love. Jake knows he’s Jason Morgan (Billy Miller), so now what?

Each thinks Jason should be with them and in coming weeks, we’ll see an epic battle between the two women who will each yank at Jason’s heartstrings. They both have a rich history with Jason, but only one can walk away with the hitman turned amnesiac. Who will win Jason and how will it be done?

Well for starters, Liz does have time on her side – she’s known Jason longer then Sam. If Jason recovers his earliest memories first, he could recall how a fresh faced Liz reached out to him and saved him from a gunshot wound that snowy day way back when.

And, of course, Jason has saved Liz’s life too. Liz could tell Jason about how much they crushed on each other and how he was worried about her safety because of his mob life and that was the major obstacle to their romance.

Plus, if Liz wanted to play dirty by casting Sam in a bad light, she could remind Jason that the night the two of them kissed on the bridge (the scene that he remembered just the other evening), it started because Jason saw Sam kissing another man – John McBain (Michael Easton).

Liz could push it even further by telling Jason the first time she and Jason consummated their relationship was after Sam cheated on Jason with rat fink Ric Lansing (Rick Hearst).

Jason may not remember the specifics, but he hates Ric in this life too and won’t like the idea that Sam was with Ric before. But most horrific in Liz’s arsenal of information is the fact that Sam stood by and let someone kidnap little Jake Spencer (James Nigbor) when he was a baby.

Sam also hired goons to terrorize Liz and her kids at the park to try and break up Liz and Jason. Liz and Jason’s main obstacle was his mob lifestyle which is now done, so Liz could say that means it’s their time at least.

For her part, Sam may try and spark Jason’s memories by getting him to take her on a long motorcycle ride. When Jason gave Sam a ride to Patrick Drake’s (Jason Thompson) from the garage, Jason had a memory a few months back.

But Liz was also a cycling companion after Lucky Spencer (Jonathan Jackson) died, so that could blow up. Sam could recount their adventures and spark some memories, but they also spent a lot of time engaged in criminal activities together – the new Jason may not like that.

Also, if Jason recovers his earliest memories of Sam, will he be shocked to realize she was with Sonny Corinthos (Maurice Benard) and not him? But Sam can also remind Jason that, lie Liz, she also nursed Jason through a medical drama with amnesia – but then Robin Scorpio (Kelly McCullough) cured him.

That’s all good stuff, plus Sam can tell Jason some of the dirty antics that Liz has engaged in – remember after Danny Morgan was kidnapped and presumed dead, Liz changed a DNA test.

Liz then convinced Sam that she was with Jason so Sam would serve Jason with divorce papers. That was a dirty trick, but then also remember Sam seduced Lucky while in a Cassadine-esque fit. Similarly, both of Jason’s big romances had a slow burn with another man in the mix to start with – it was Lucky for Liz and Sonny for Sam.

They both began as friends with Jason then it turned into something more when he comforted them after the breakup of their other big relationship.

The bottom line is that both Liz and Sam have good things to remind Jason of from their past lives together – and both have lots of dirt to try and tarnish the other in Jason’s eyes. Will it be the intense struggle between Sam and Liz to win him – and will inevitably get ugly – that drives Jason to leave town altogether?

Billy Miller has scheduled a hiatus after November sweeps to enjoy some vacation time – but will the storyline excuse be that they are ripping him apart without regard to his well-being?

Look for the epic Sam vs. Liz battle to begin soon – with no holds barred as each fights to keep the man they love and send the other packing for good. Check back with CDL often for more “General Hospital” spoilers on Jason’s reveal fallout plus much more.