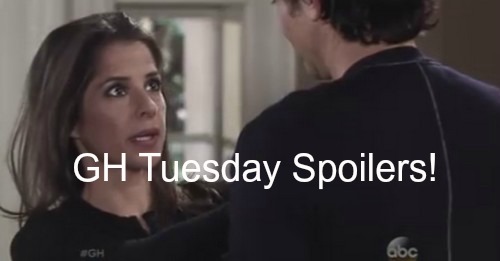 “General Hospital” (GH) spoilers reveal that Helena Cassadine’s (Constance Towers) death left Jason Morgan (Billy Miller) without the answers he wanted about who knew about his identity. Sam Morgan (Kelly Monaco) now knows there’s no hope for his memory to be restored.

It was the hit from the car – rather than Helena – that triggered Jason’s amnesia. You’ll recall that Patrick Drake (Jason Thompson) was not happy that Sam took off after Jason, but now she’s back. Patrick will ask if Sam found what she was looking for – she didn’t.

This is Sam’s chance to salvage her relationship with Patrick since. Sam tells Patrick she still loves him since she doesn’t see hope and thinks Liz Webber (Rebecca Herbst) will keep Jason. And, we do have to wonder, is Helena really dead?

She’s been “dead” a number of times before and then turned up miraculously alive. This time, though, maybe it’s the real deal since Constance Towers may be ready to hang up her Helena shoes and retire.

But perhaps – just maybe – when Nikolas Cassadine (Tyler Christopher) mourns at her bedside, she’ll sit up and say “bazinga.” And speaking of dead, looks like Carlos Rivera (Jeffrey Vincent Parise) is not. But how did he survive? Was he wearing a vest?

There was blood on his chest and Anna Devane (Finola Hughes) put a number of bullets in him. Was this some ploy? Some bit of theatrics where Kyle Sloane (Robb Derringer) took a bribe from Carlos and put blanks in Anna’s gun?

Seems like if Carlos had been shot, he’d still be recovering. We’ll find out more on Tuesday. And will Carlos assume the baby is his and will Sabrina Santiago (Teresa Castillo) then try to convince him the baby is Michael Quartermaine’s (Chad Duell).

Sabrina doesn’t want a criminal as her baby daddy. So much for telling the truth – Sabrina may double down on lies instead. Nathan West (Ryan Paevey) and Maxie Jones (Kirsten Storms) share some sweet couple time. That’s nice, but where’s the excitement for the viewers?

In comparison, Dante Falconeri (Dominic Zamprogna) and Lulu Spencer (Emme Rylan) are at war still. Dante wants to regain her trust but Lulu doesn’t think there’s a way out. Looks like the rift will get deeper.

Now that she was rescued by Carly Corinthos (Laura Wright), Kiki Jerome (Hayley Erin) turns herself in at the PCPD. Ava Jerome (Maura West) wants to help Kiki to get back in her daughter’s good graces but Kiki is not interested.

Kiki tells Jordan Ashford (Vinessa Antoine) she’d rather go to jail than take favors from Ava. Too bad, Ava does have an in with the DA. But it doesn’t look like Kiki will do any hard time. “General Hospital” spoilers reveal that Carly will save her.

Carly will go down to the PCPD and vouch for Kiki since the poor girl has endured enough already. Carly may say the accident was her fault – that she was checking her phone and looked away – she’ll get the heat off Kiki.

What helps is this long after the fact, they can’t prove Kiki was drinking. Morgan Corinthos (Bryan Craig) was taken by his mom and put in the hospital under a psychiatric observation hold. Sonny Corinthos (Maurice Benard) comes to talk to Morgan.

Sonny opens up his gooey soft side to explain to Morgan how hard his own struggle with bipolar is, how he blames himself for Morgan having it, and how much he loves him. Aww… They bond. All this and more on the Tuesday, November 24th show. Watch and then come back to CDL for more “General Hospital” spoilers, gossip and more.