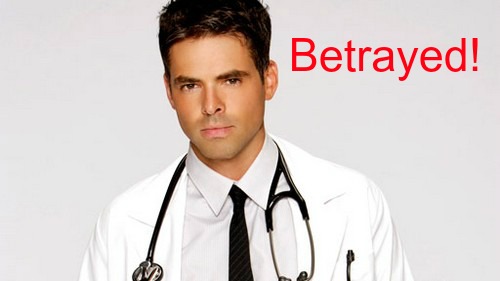 We know from “General Hospital” (GH) spoilers and casting news that Patrick Drake (Jason Thompson) is exiting Port Charles around the first of the year, but what will go down between now and then with this fan-favorite character?

This week, we will see Patrick reeling from the crushing blow that his fiancée Sam Morgan (Kelly Monaco) shared a cheater’s kiss with Jason Morgan (Billy Miller). After a minute, Jason stopped the kiss, but it did not look like Sam was going to check herself at all.

If Jason had not pulled back, it’s very likely he and Sam would have made love, but he did the right thing and stopped it because he loves Liz Webber (Rebecca Herbst). But Sam was, as usual, acting impulsively and recklessly in the moment.

Will this cost her Patrick? “General Hospital” rumors indicate that Sam will reaffirm her love and tell Patrick she cares for him, but will it be too little, too late? Bad enough she kissed Jason but then Sam was still mooning over Jason’s wedding ring when Patrick came in.

Patrick asked her at the church if she stopped loving him the moment she found out Jason was alive and she gave a vaguely reassuring response, but it’s looking more and more that her love for Patrick is fading fast. Patrick will be disgusted that Sam is willing to put their life aside for a shot at Jason.

This will not only put little Danny at risk because of Jason’s mob past but will also break Emma Drake’s (Brooklyn Rae Silzer) heart – and Patrick has had enough of women disappointing his daughter.

To pile more insult to emotional injury, Patrick will find out soon that Robin Scorpio (Kimberly McCullough) has known for a long time that Jason was alive and that’s why she left the family and went to “Paris” (that may or may not be where she’s really been held).

For Patrick, this means that he has lost two women he loves who both chose Jason over him: Robin and Sam. Robin’s lies are further compounded because she well knew that Sam and Patrick were romantically involved.

Because Robin knew Sam’s husband was alive, she allowed (by her lies of omission) both Patrick and Emma to get attached to Sam and Danny knowing it could only lead to heartache for people Robin purports to love.

Although it’s not Jason’s fault, Patrick will be furious and hurt that he’s constantly playing second fiddle to the hit man/amnesiac. This anger will spill over onto Sam and Robin while he has to keep himself in check in other ways to comfort Emma.

If you weigh Jason and Patrick on a comparative scale, it seems to tip heavily in Patrick’s favor. Patrick saves lives – Jason takes lives. Patrick is honest – Jason is secretive. Patrick’s default is to heal – Jason’s default is to attack. Poor Patrick is truly a case study in “nice guys finish last.”

After all, if not for Robin, Patrick would be married to Sabrina Santiago (Teresa Castillo) and their son Gabriel might have survived. As Robin’s motivations were Jason-related, Patrick can see Jason as the source of all the pain in his life.

Of course, Jason was not driving any of this intentionally. He’s been a pawn in Cassadine games now for several years and has not purposefully done anything to harm Patrick. But Patrick may be too hurt to rationalize this – and could lash out soon.

Remember last week, Liz advised Patrick to keep Sam far away from Jason and things would be fine. Patrick thought Liz was overreacting but it looks like the little liar was right! Sam may smooth things over for a couple of days, but then it’s going to get much worse.

Later in the week, Jason will leave town to find answers to his past and Sam will follow. This will leave Patrick at home with an upset Emma, possibly babysitting Danny, while Sam follows Jason like she’s an eager puppy on a leash.

His BFF Liz will also leave to chase down Jason leaving Patrick with no one to turn to. And then he’ll see a pregnant and (sort of) happy Sabrina moving on with her life which shows him what he’s lost. Look for Patrick’s pain spiral to start in 3-2-1…