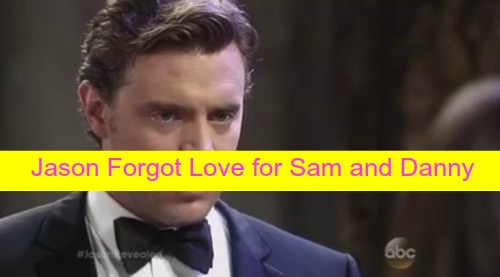 “General Hospital” (GH) spoilers show that Jake Doe (Billy Miller) will make his own reveal on today’s episode, but the #JasonRevealed plot will also leak over into Monday’s show which will be a continuation of the reveal and wedding episode.

While Liz Webber (Rebecca Herbst) has had months to prepare for the ugly truth coming out (while hoping it would not), Sam Morgan (Kelly Monaco) will be blindsided when she learns that her good friend Jake is really her husband Jason Morgan.

Sam will go ahead and break things off with Patrick Drake (Jason Thompson) in anticipation of a revival of her relationship with her husband Jason. But is Sam ditching her new lover and fiancée a little too quickly?

Sam is going to be absolutely crushed that Jake will not run into her arms and reignite their passion. Fact is, Jake’s head will know he’s married to Sam, but his heart will still belong to Liz after the big reveal. And that’s going to hit Sam hard.

“Jason Morgan” is going to be just a name and an abstract concept to Jake at first. He will have little to no memories to associate with this past. Being “Jake” and loving Liz is Jake’s reality and all he knows at the moment. And new Jake is an honest and heartfelt guy.

He would feel like being with Sam would be tantamount to cheating on Liz, no matter what Liz has done. After all, Liz has cared for him when 100% of Port Charles was against him – and that will be front and center in Jake’s mind right now.

In fact, Jake looks to be pretty heartbroken about announcing that he’s Jason Morgan. He seems angry and sad because he knows this means he can’t go through with marrying Liz even though he desperately wants to.

This reveal is going to be a layer cake of pain for all involved starting with today’s tense cliffhanger episode. At first, Jake will have no idea that Liz was keeping the truth from him and will focus all his ire on Nikolas Cassadine (Tyler Christopher).

Liz will no doubt try and prolong Jake’s faith in her and play that she was ignorant of his true identity, but someone will blow that up for her quickly. Laura Spencer (Genie Francis) knows that Liz knew the truth, but she’s promised to keep it zipped, so it’s doubtful Laura will rat out Liz’s deception.

The likeliest candidate to shout the truth from the rooftops is Hayden Barnes (Rebecca Budig). Hayden 100% knows that Liz was in on the ruse and may reveal it to protect Nikolas from Jake’s wrath.

But even when Jake knows that Liz hid the truth from him, he will understand why she did it. Jake knows that Liz truly loves him and that will count for a lot with him, particularly because he has no romantic affection for Sam or memories of his life with the sultry PI. Jake’s had a few flashes here and there, but the bulk of his recovered memories (scant as they are) have been of life with Liz. She was even the reason he chose Jake as his nom de guerre.

Sam will assume when the reveal is made that Jason will be hers again, but that’s just not how the ball will bounce – at least not for a while. In fact, Liz may have the upper hand in this situation. Now that little Jake Spencer (James Nigbor) is back from the dead, both women have a significant romantic past with Jason plus a child with the former mob hitman. Plus – and this is critical – Liz has Jason in her house and in her bed right now and we know that possession is 9/10th of the law.

Will Liz stake her claim hard on the grounds of “finders keepers” and fight Sam tooth and nail for Jason? Or will she turn tail and run in shame? My money is on Liz doing everything she can to keep Jake, even after he knows that she’s been deceiving him for months.

Liz has nothing to lose by going all in against Sam after the reveal. It’s her only chance to keep the love of her life, so why not? And unless Jake’s memories return of his life as Jason, Sam may just lose him for good.

Stay tuned today to CDL after the Jason reveal for more “General Hospital” spoilers on what’s next for the Sam-Jason-Liz triangle and who will triumph.