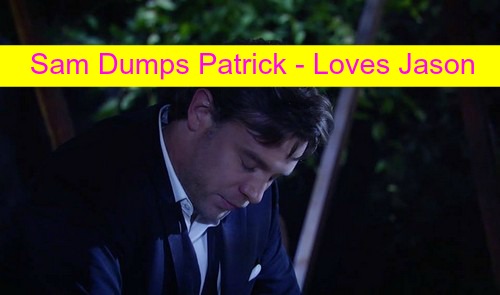 Check out these “General Hospital” spoilers for the Tuesday, November 10 show. The wedding is done but the chaos has just begun! Tuesday will be aftershocks from the reveal and more on the custody hearing.

Liz Webber (Rebecca Herbst) is still playing innocent victim in all of this but is terrified she’s about to lose it all anyway and that Jason Morgan (Billy Miller) will dump her now that he knows he’s married to Sam Morgan (Kelly Monaco). But Liz has a few assets still in play.

First, Jason doesn’t remember Sam and second, Liz has kids that adore Jason/Jake that were hoping he would adopt them. Of course, Jason also knows he’s got a kid in Danny as well, but he hasn’t been hanging with Danny like he has with Liz’s boys.

After Liz and Jason have a serious talk on the bridge, they’ll head back. Jason won’t dump Liz but will tell her that this thing has legs and he needs to figure out what it means to be Jason and this new reality. But Jason will reassure her that he loves her, it’s just complicated.

Liz will have a heartbreaking moment when she sees Jason with the kids later. Can’t wait to hear Jake Spencer (James Nigbor) say “I told you so.” Liz’s boys will be devastated to hear that the wedding is off and Jason won’t be their dad (except Jake).

Patrick Drake (Jason Thompson) is also reeling from the announcement. As far as he can see, once Sam realized Carly Corinthos (Laura Wright) was telling the truth, it was like Patrick became invisible to her. Sam can’t see past Jason – she never could – and had just really tried to let him go and now it’s all come rushing back.

Patrick does not stand a chance and he knows it when he asked if she instantly stopped loving him. When will he call Robin Scorpio (Kimberly McCullough) to break the news to her?

Sam will be nice about it, but she makes it clear that Jason is her guy. Patrick will remind her Jason doesn’t know her and that Jason is in love with Liz, but Sam won’t care. That’s Jason so she and Patrick are done.

It’s bad enough she’s dumping Patrick, but this also means that Sam is dumping Emma Drake (Brooklyn Rae Silzer) and tearing Danny away from Emma. Plus Emma will lose what she thought was going to be a forever mom in Sam. The impact on the kids is what will be hardest to watch.

Out at Wyndemere, there’s more fallout. Hayden Barnes (Rebecca Budig) lets loose some of the cards she’s been holding close to the vest – namely that she knows for sure that Nikolas Cassadine (Tyler Christopher) has known since the start that Jake was Jason.

Nikolas wants her to trust him and asks why she won’t. How much will Hayden reveal? Will she drop the big bomb that she knows he tried to have her killed over this secret? Or will she eke it out little by little?

Carly finally makes it to the courthouse and to the custody case just in time to hear Sonny Corinthos (Maurice Benard) publicly and very specifically threaten to murder Ava Jerome (Maura West). Who else will overhear and how will this impact the custody case?

Scotty Baldwin (Kin Shriner) and Ric Lansing (Rick Hearst) will have more dirty tactics to play out and we have to wonder if Paul Hornsby (Richard Burgi) might yet use his influence to help Ava – except he’s busy with Anna Devane (Finola Hughes).

Are both sides so contemptible that the judge will want anyone but them to have baby Avery? Or will she tell them they are both problematic choices and just throw out joint custody as the ruling? Sure Ava slept with her daughter’s BF, but Sonny got a teenage girl addicted to drugs so she would be a stripper for him.

They both have killed in cold blood and Sonny likely has a higher personal kill count than Ava, to be fair. Sonny killing AJ is a huge minus in his column despite the gubernatorial pardon, so… just saying.

Plus Carly will still be distracted from the proceedings because she wants to break the news to Sonny that his BFF is back from the dead. Sonny, however, will be angry that Carly wasn’t there. Will he even notice at first how banged up she is or will his temper override everything?

Sonny will be stunned to hear that Jake is Jason but he’s got to focus on the custody fight. Plus, what do you want to bet that Ava’s remarks about his family pitying him will take root in Sonny’s bipolar brain and start affecting him?

All this and more on Tuesday’s show – watch then come back to CDL for more “General Hospital” spoilers, gossip and more.