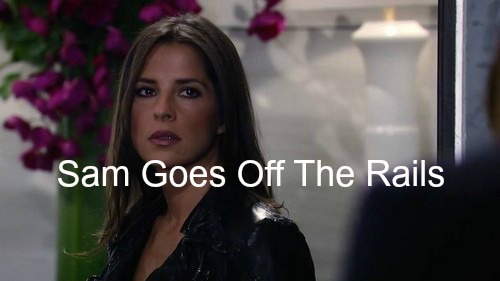 “General Hospital” (GH) spoilers tease that we may see more of the crafty and criminal Sam Morgan (Kelly Monaco) very soon. Sam is at loose ends emotionally because of her split with Patrick Drake (Jason Thompson) and impending divorce from Jason Morgan (Billy Miller).

What happens next will be a direct result of her lack of connection to the men she loved. We’ve already seen Sam desperate to restore her link to Jason by telling him about Liz Webber (Rebecca Herbst) keeping his identity secret.

That tactic worked, in so much as Jason did break it off with Liz – but it did not send Jason back to Sam because he still doesn’t remember their romantic relationship. And Sam pushing for a Liz-Jason split alienated Patrick, so that also broke her heart.

With Jason not taking Sam’s calls – as we’ve seen – Sam decided to try and reignite with Patrick and took him a Christmas present up to GH as a mea culpa for their sad split. Perhaps Sam was hoping to convince Patrick they could still make a go of it…

But then angry Liz, still frazzled from Jason dumping her, gleefully told Sam that Patrick ran off to reunite with Robin Scorpio (Kimberly McCullough). That was a mean-spirited exaggeration to be sure. Liz did not know that and was making assumptions to deliberately hurt Sam.

Both Sam and Liz are being very agro with each other these days, so it was in the spirit of their ongoing rivalry that Liz lashed out. None the less, it sent Sam away feeling very wounded and now certain that Patrick had rebounded right back into the arms of his ex-wife.

When Patrick and Robin return to Port Charles triumphant for Christmas and looking coupled up, Sam will know that relationship is dead as a doornail. That leaves Jason her one hope. However, at the holiday Gala, we see Jason do a double take at Liz who looks stunning.

Then later, Jason will have a tender moment with Liz that Sam oversees and which makes her certain that she no longer has a shot with Jason either. Sam still tries, though, and will make a confession to Jason that she’s hoping will bring them closer.

In coming days, we’ll see Jason reunite with Liz – but that may not last too long – depending on what Sam does. “General Hospital” spoilers tease that Sam will have hit emotional rock bottom and will start acting out in harmful ways towards Liz.

Even though you can see that Sam is justified – Liz did knowingly steal her husband – that won’t excuse the outrageous depths to which Sam may sink. Sam knows some pretty bad dudes from her life as a con and criminal.

Will she engage some thugs to harass Liz as she’s done in the past? Will Sam try something more outrageous like physically harming Liz? Can Sam’s parents Alexis Davis (Nancy Lee Grahn) and Julian Jerome (William deVry) pull her back from the brink before she does something unforgivable?

Lest you lose all hope, GH spoilers also tease that Jason will have some memories of his romantic life with Sam return close to Christmas – too bad he’ll be recoupled with Liz by that point. Will Jason have buyer’s remorse and reconsider being with Liz?

And how heartbreaking would it be if Jason is ready to walk away from Liz and go back to Sam – but Sam’s outrageous antics targeting Liz turn Jason off for good? Will Sam sabotage her chance to have Jason back by targeting Liz for revenge?

Sam might be wiser to try patience and wait for Jason to remember their love – but patience is not Sam’s strong suit. She’s a woman of action and will act soon, although it will not be in her long-term best interest. Who can save Sam from herself?

Share your thoughts on Sam’s unraveling in the comments below and come back to CDL for more “General Hospital” spoilers and news every day.