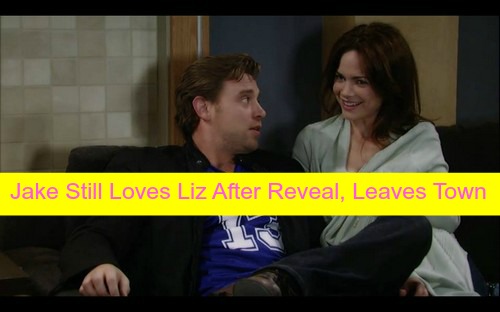 “General Hospital” (GH) spoilers reveal that knowing the truth does NOT change Jake Doe’s (Billy Miller) heart when it comes to lying Liz Webber (Rebecca Herbst). Today on GH, Monday, November 2, Carly discovers the truth, but what then? This is a tricky one.

Even though we do not expect Jason to go through with the wedding to Liz, since he’ll be told that he’s already married to Sam Morgan (Kelly Monaco), the reality is much more complicated than any of the women in Jason’s life will anticipate.

This is hard because all Jake will know about his life as Jason is what he is told – and this conflicts with what he feels. Jason still loves Liz. She’s been his whole world for the past year since she found him in the ER – and she had feelings for him before she knew he was Jason.

To give Liz credit, she cared for Jake Doe as a random amnesiac with no info about who he was. Her heart reached out to the man on the inside and felt affection. Ric Lansing (Rick Hearst) knew this and that’s why he reacted so viciously.

Liz was struggling with feelings for the amnesiac while Ric was busy trying to woo her – and she likely would not have accepted the ring from Ric even if Carly Corinthos (Laura Wright) had not blown up the engagement with the Hayden Barnes (Rebecca Budig) truth bomb.

So while Jason will know that he’s supposed to be with Sam, he’ll want to stay with Liz. Her home is his home and her kids are his kids – he was planning on adopting her non-Lucky Spencer (Jonathan Jackson) kids and is attached to them all.

Jason won’t remember his love for Sam at all. He’s going to be crushed by confusion but definitely not ready to pack up and move in with Sam – plus there’s a very strong indication from persistent “General Hospital” rumors that Sam is already married to Patrick Drake (Jason Thompson) courtesy of a quickie elopement.

Nothing about this wedding-crushing reveal will go as expected – expect perhaps for Hayden. Chaos will result and that’s what Hayden wants – she’s generally interested in making trouble.

Hayden is likely the only person who will leaved the aborted wedding with a smile on her face. Everyone else will be floored – most of all Jason. What’s next for the Port Charles amnesiac? Jason is going to want to have a serious sit down with Liz – it looks like he will give her a chance to explain her actions.

Liz will get the chance to tell Jason that she was drawn to him and loved him for far longer than she knew he was Jason. Liz will say she was shocked when she found out he was Jason and not some other guy.

Sure it was selfish, but it was also done purely out of love. Liz has lost Jason before in the past – to Sam – and it crushed her. Yes, she was keeping him from his son Danny, but once little Jake Spencer (James Nigbor) came back, she was choosing to keep him with another son.

This will all be very confusing for Jake, leading up to his departure from Port Charles. Jake will leave town after November sweeps – but not for good (whew!). Billy Miller wants a vacation and has some auditions planned, but will be back after the first of the year to serve out the more than a year left on his contract – this is what’s planned.

However, there’s always a chance we could lose Billy for good if he gets a juicy part on prime time – he’s already landed a guest spot on the new FOX show Urban Cowboy.

The bottom line is that this Friday, November 6 and Monday, November 9 will be pivotal in this reveal saga and fans will be surprised that when Jake finds out he’s Jason, he will react in ways that will stun the women in his life and those watching this unfold. Stay tuned to CDL for more “General Hospital” spoilers on the Jason reveal, the wedding and the fallout.

It's happening. #JasonRevealed this week on #GH!