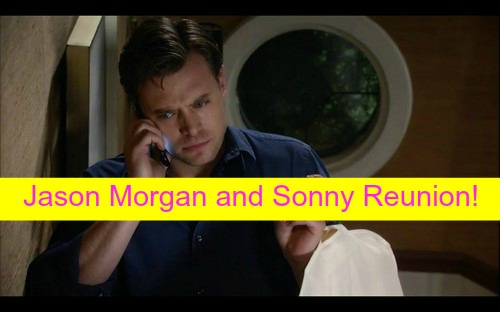 “General Hospital” (GH) spoilers indicate that Sonny Corinthos (Maurice Benard) will be one of the hardest hit by the revelation that Jason Morgan, his BFF and cartel assassin is back from the dead. When Jake is revealed as Jason, the shock waves will hit all over Port Charles. Here’s a look at how Sonny and Jake Doe (Billy Miller) will handle the news that they’re besties once again.

Interestingly, Sonny had rubbed up against Jake with much antipathy in months past. Sonny just did not like the guy. He groused when Carly Corinthos (Laura Wright) bonded with Jake and was simultaneously angry and jealous that the guy was hanging around his lady love. It was interesting to watch the differences in how Carly and Sonny related to Jake.

Carly seemed to recognize the kindred spirit that was her former BFF and responded to Jake as if he was Jason all over again. They bonded and hung out. Sonny, however, seemed to resent Jake’s presence. Could it be that Jake’s similarities to Jason served to remind Sonny that he lost his best friend to mob violence when Jason was trying to protect Sonny?

It wasn’t until Sonny’s life was on the line and Jake rushed into the line of fire – literally – to save him that Sonny recognized the spirit of Jason within Jake. Not only did Sonny refer to Jake as Jason in the aftermath of the shooting at the warehouse, but Sonny later insisted at the hospital that Jason had been with him while he was shot and dying.

Of course, Liz Webber (Rebecca Herbst) stepped up and suggested that Sonny was traumatized at first then too heavily medicated to know what he was saying. Patrick Drake (Jason Thompson) hesitantly confirmed that Sonny may have been delusional, but it was Liz’s insistence that forced Sonny into dropping the issue. But it did not dispel his inner conviction that Jason was with him.

Sonny will be thrilled to know that Jason is back from the dead and eager to bond with his BFF to make up for lost time.

Sonny will thank Jake again for saving him at the warehouse. One obstacle that will be interesting to watch is that Jake doesn’t seem to have the affinity for crime that Jason did. Jake knows he’s capable of violence and does not like it.

How will Jake react to the knowledge that he was an assassin/enforcer for Sonny? Jake seems to be mentally reset back to the Jason Quartermaine of old – a decent guy – who just happens to have retained the killer skills he obtained working for Sonny. It’s likely Sonny will invite Jake back into the cartel fold right away – Sonny may even want him to run it while he’s rehabbing.

But it’s doubtful that Jake will be willing to step into this life of crime. He has no memories of his life as Jason and won’t want to be a criminal or killer. This debate aside, Sonny and Jake will bond and this will encourage Sonny to focus on his healing and get back on his feet. Sonny has a lot to live for right now – he’s got Carly, Avery and now Jason. That’s all he needs.

Whatever the future holds for Sonny and Jake, for now, we’ll see a reunion that means a lot to Sonny. And perhaps Sonny’s affection for Jake can help him recover some of his Jason life that he lost to amnesia.

Stay tuned to CDL for more “General Hospital” spoilers on the big Jake reveal, Sonny’s progress and the fallout from the news that Jason is back from the dead.