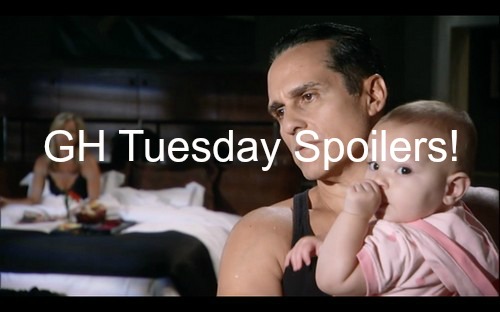 “General Hospital” (GH) spoilers indicate that things are heating up again in the war between Ava Jerome (Maura West) and Sonny Corinthos (Maurice Benard). Sonny is still looking into the gun runner that he heard was in town and he talks to his favorite cop about it.

Dante Falconeri (Dominic Zamprogna) is with his dad who tells him that he’s certain Ava is into something really bad and says she’s a danger to Avery and Port Charles. Will Dante start an investigation into Ava or let his dad handle it his way?

Morgan Corinthos (Bryan Craig) may be listening in on this conversation. Morgan will talk to Kiki Jerome (Hayley Erin) who tells him that her mom is pressuring her to reconcile but she can’t open herself up, despite of Avery, because she knows she can’t trust Ava.

Morgan will overhear something – likely from Sonny talking to Dante or a mob associate – and will decide to stick his nose into dangerous business. Will Morgan’s life be on the line? Will Ava save him from himself or will someone else step in to save his life?

Also feeling at risk is Hayden Barnes (Rebecca Budig). She’ll take a break from tending to Nikolas Cassadine (Tyler Christopher) and call up Curtis (Donnell Turner) to ask him if he has an update – he does. Curtis confirms that Shawn Butler (Sean Blakemore) didn’t shoot her.

That means the bullet in Hayden’s head was meant for her – not Jason Morgan (Billy Miller). Now Hayden has to worry about who’s gunning for her and if they still want her dead. Will she realize right away that it was Nikolas that came after her?

Speaking of Jason, he has a big talk with Robin Scorpio (Kimberly McCullough) on the bridge where they have shared major moments in their life – even though Jason doesn’t remember their shared past. Does Robin have any hope for Jason regarding his memories?

Robin may be getting a reboot of her life soon though she doesn’t know it yet. Maxie Jones (Kirsten Storms) comes to see Patrick Drake (Jason Thompson) and encourages him to make the most of his new chance with Robin ASAP. Will he propose soon?

In addition to answering to Hayden, Curtis is quizzed by Jordan Ashford (Vinessa Antoine) who wants to know why Curtis is in Port Charles. What will he tell her? And what’s in the past between these two – and is there future romance in the works for Curtis and Jordan?

Also demanding answers is Dillon Quartermaine (Robert Palmer Watkins) who gets in his dad’s face. Dillon wants to know why Paul Hornsby (Richard Burgi) was so awful to his mom Tracy Quartermaine (Jane Elliot).

Is there anything Paul can say to keep Dillon from hating him? Plus, how much does Dillon know? Johnny Zacchara (Brandon Barash) wants answers from Lulu Spencer (Emme Rylan). He’s looking for more from Lulu but she seems solely focused on revenge.

Johnny wants to know what she has in mind after they take down Valerie Spencer (Brytni Sarpi) and if she plans to reconcile with Dante. What will Lulu tell him and how will she handle Johnny’s romantic advances?

Will Val’s New Year’s get off to a disappointing start? She made plans to hook up with Dante and watch football but it looks like she will end up at the Floating Rib watching the game with Dillon instead. Will they talk about Dante and Lulu?

Don’t miss a moment of the Tuesday, December 29 GH episode then come back to CDL for more “General Hospital” spoilers, news and commentary.