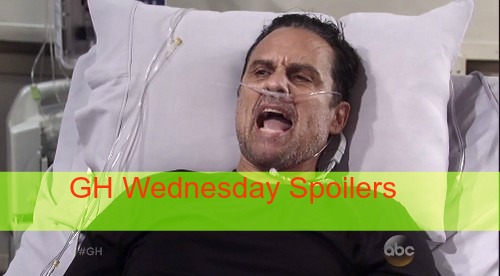 Wednesday’s GH is all about shocking revelations – check out these “General Hospital” spoilers for the October 7 episode. As we wrote a while back, Sonny Corinthos (Maurice Benard) will be paralyzed for some time as a result of the shooting and the subsequent surgeries. We also wrote that Sonny would refuse to marry Carly Corinthos (Laura Wright) until he recovers. Now it’s time for the kids to hear the shocking revelation that their dad can’t walk and will need extensive physical rehabilitation.

Morgan Corinthos (Bryan Craig) and Michael Quartermaine (Chad Duell) will be stunned to hear their dad’s prognosis. This makes it all the more important that Michael stay in the role of head of the Corinthos syndicate, but Sonny won’t like it and will come down hard on Michael who will say he did what he had to do and was taking care of business. Michael won’t back down.

Liz Webber (Rebecca Herbst) is shocked to hear that Jake Doe (Billy Miller) had Sam Morgan (Kelly Monaco) trace her phone call back to Wyndemere. Liz is scared that Jake knows she was talking to Hayden Barnes (Rebecca Budig) and will lie and try to push it back at Jake for “spying” on her. This frustrates Jake who will call Sam and ask her to help him.

Did you notice that Liz said at Kelly’s, to Sam and Patrick Drake (Jason Thompson), “the sooner we’re all married, the better”? Liz just wants to tie the knot with Jake, have Sam marry Patrick, and has deluded herself into thinking this will make things “fair.” Liz even tries on a veil and daydreams about her bigamist wedding. Meanwhile, Jake is tormented not knowing who he is.

Sam agrees to help Jake and later she and Anna Devane (Finola Hughes) join forces to tackle a difficult topic with Emma Drake (Brooklyn Rae Silzer). Is this about the engagement? Or perhaps, did Anna convince Emma to change her school paper from being about Anna – since she’s feeling so guilty about killing Carlos – to writing it about her new mom-to-be Sam instead?

At Wyndemere, Laura Spencer (Genie Francis) and her misbehaving son Nikolas Cassadine (Tyler Christopher) talk about Hayden – who is eavesdropping on the conversation. Hayden will be pleased to hear that Nik has feelings for her but less thrilled to learn that Nik tried to have her killed. Also, will Hayden overhear that Jake is Jason? It’s about time for her to remember.

Ava Jerome (Maura West) shows up to the hospital with baby Avery. Looks like little Avery may be having some sort of medical crisis. There have been “General Hospital” rumors swirling for a while that Avery would have a medical issue that would reveal something about her. What could it be? Is it that Sonny’s not her father?

What if it’s something crazy like Avery isn’t Ava and Sonny’s baby but was swapped while she was kidnapped then saved? This is a whole new critical plot line exploding. Also, Ava will be furious when she hears that Nina Clay (Michelle Stafford) and Franco (Roger Howarth) are playing mommy and daddy with Kiki Jerome (Hayley Erin).

The rest of this week in Port Charles will be action packed on a number of storylines that are all coalescing towards each other and will tie up into an overarching master plot. Kudos to the new writers for breathing new life into our favorite characters! Check back with CDL daily for more “General Hospital” spoilers, gossip and news.