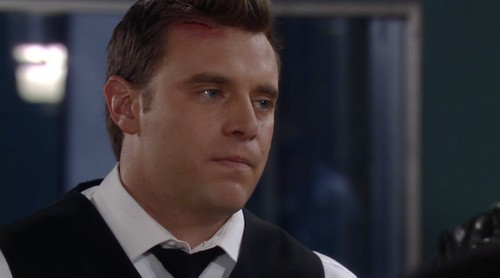 Check out these “General Hospital” spoilers for our favorite ABC soap for Thursday March 5. Exciting things are afoot in Port Charles. First let’s look at some hot Jake Doe (Billy Miller) spoilers. The cuffs are off of Jake as of Wednesday and Commissioner Sloane (Grayson McCouch) has tasked him to go undercover working for Julian Jerome (William deVry) in the mob. But Jake is still trying to figure out who he is and what to do about the women in his life. Liz Webber (Rebecca Herbst) told Jake flat out that she digs him, but Jake will have a dream/memory about him and a woman that’s not Liz.

This will lead Jake to ask Sam Morgan (Kelly Monaco) to help him find that woman. Sam spending time with Jake on this quest will set off Patrick Drake’s (Jason Thompson) jealousy and can put that relationship at risk. But then Patrick will be contacted by someone important to him that may have him push Sam aside.

There’s a huge rumor that the character of Robin Scorpio has been recast and that Rebecca Budig will take over the role. If she’s back, Patrick’s life will be thrown for a major loop. And as Jake and Sam begin to spend time together soon, Jake will bond with his son Danny and this may lead some to speculate about their closeness. The real question is, was Jake/Jason dreaming about Sam? Or was it another of his past lovers?

The Luke/Fluke (Anthony Geary) story is about to pick up pace as well. If Tracy Quartermaine (Jane Elliot) can get Damien Spinelli (Bradford Anderson) to leave off his Maxie Jones (Kirsten Storms) obsession for a few minutes, he will dig into Luke Spencer’s sordid background and find some answers about what went on in the Elm Street house that broke Luke’s brain and sent Patricia away from the family. Rumors are flying that Damien will be the one to finally find Patricia and that they’re casting that part now.

And speaking of Maxie and Damien – Damien has not given up on Spixie and will seek some advice on how best to woo her away from the oh-so-hot Nathan West (Ryan Paevey). Spinelli will soften Maxie enough up to get a steamy kiss from her and Nathan will see this go down and will not be pleased. The question is, did Spinelli time the kiss specifically for Nathan to catch them smooching or was that just a happy accident?

On the GH baby front, how cute is it that Kirsten Storms is able to bring her baby to work with her and have her on screen. For those that don’t know, Kirsten’s daughter Harper Rose Barash – her child with husband and fellow GH star Brandon Barash (aka Johnny Zacchara) – plays Maxie’s daughter Georgie Spinelli. That’s adorbs. And, did you check out the amazing pacifier on baby Avery Corinthos at Ava Jerome’s (Maura West) memorial? It said “Mute button.” OMG! Too cute. Have to get one.

Today, look for Jake Doe to walk out of the hospital a free man, Judge Walter to hand custody of baby Avery over to Michael Quartermaine (Chad Duell) and Franco (Roger Howarth) and Nina Clay (Michelle Stafford) to get a surprise visitor at Shadybrook that will launch a scheme.

Be sure to check back with CDL every day for “General Hospital” spoilers and rumors about all your favorite Port Charles residents and their love lives. And don’t forget, the Nurse’s Ball is coming up and a fan favorite will be brought back for the event. Who could it be? Spoilers on this one soon too!