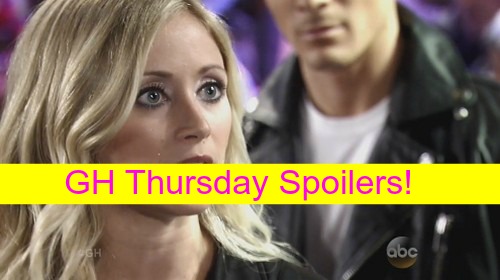 These “General Hospital” spoilers will show you what’s happening with the doomed duos on the Thursday, October 29 show. We are getting close to two major breakups on GH – Lulu and Dante and Liz and Jake!

Jake Doe (Billy Miller) is playing the good father to Liz Webber’s (Rebecca Herbst) kids by taking them trick-or-treating while Liz works. Jake got the boys all dressed up and he’s even got a matching costume with his mini-me little Jake Spencer (James Nigbor).

Liz is thrilled to see how great Jake is with her boys and this helps her rationalize pressing on with her plans to marry Jake even though she knows he’s got a wife – too bad it looks like Damien Spinelli (Bradford Anderson) is about to crush her dreams.

Now that Jake got his medical records for Damien’s reverse engineered facial reconstruction program, it’s just a matter of time. Remember Damien crowed that he’s a “cyber God” and he’s about to prove it when he solves the Jake mystery.

Fingers crossed that someone more destructive – like Hayden Barnes (Rebecca Budig) – doesn’t beat Damien to the reveal. “General Hospital” rumors have swirled for months that Jake will know who he is before the rest of town finds out – could he find out this week?

With no clue that her back from the dead husband is just across town, Sam Morgan (Kelly Monaco) is out trick-or-treating with her fiancé (and rumored husband) Patrick Drake (Jason Thompson) and their kids.

GH rumors indicate these two may have eloped so this could be their first – and last – family outing before the Jake reveal busts them up. The first break up – Liz and Jake – is due this week and Sam and Patrick’s split should follow not too long after the explosive wedding.

Maxie Jones (Kirsten Storms) is not letting the secret issue go – although she promised Nathan West (Ryan Paevey) that she would. Maxie talks to Tracy Quartermaine (Jane Elliot) – is it about Dillon Quartermaine (Robert Palmer Watkins)?

Since Maxie now suspects that Dillon and Nathan’s secrets are one and the same, will she shamelessly try to get the dirt out of Tracy? Also, since Maxie is dressed up as Cleopatra, can we expect to see Nathan shirtless in a little Roman skirt as Marc Anthony? Yummy!

Lulu Spencer (Emme Rylan) and Valerie Spencer (Brytni Sarpi) continue their talk about Dillon. Valerie doesn’t want Lulu hating Dillon when she knows his angst is about her one night stand with Dante.

Their talk is good, but Dante Falconeri (Dominic Zamprogna) assumes the worst and waits until his wife leaves then confronts Valerie. This, in turn, makes Dillon assume the worst. Valerie reassures Dante but he’s too guilt-ridden to function. Dante heads off to GH to chat up Sonny Corinthos (Maurice Benard).

Here’s where this could get interesting. Will Sonny encourage Dante to clear the air with Lulu and tell his son that his wife will forgive him for the misstep with Valerie? Wouldn’t it be heartbreaking if Dante decides to come clean just as Lulu learns the truth about the affair and dumps him for his months of lies? Lulu will come across some titillating footage from Dillon’s behind the scenes footage. Will Lulu see Valerie’s confession or will it play on the big screen for all to see?

Paul will love to hear dirt about the Corinthos clan and will encourage his son not to give up on Lulu. Will Dillon act on this and try to break them up by “accidentally” letting Lulu see the footage of him and Valerie talking about the one night stand with Dante?

Ava wants to talk to Paul about her custody case. At first, she may be looking for his advice as DA and how he might help her by leaning on a judge. But it looks like their interaction might turn more personal.

Are the dirty DA and the murderous mob maven going to get romantic? Will Paul step up and help out Ava – or at least comfort her in her time of crisis. Is it possible there’s a sliver of humanity inside Paul despite all his rotten schemes, plotting and murders?

Don’t miss a moment of Thursday’s action – major storylines are exploding today and tomorrow! Be sure to come back to CDL after the show for detailed “General Hospital” spoilers for Friday’s big Halloween extravaganza and blow up on the Haunted Star!