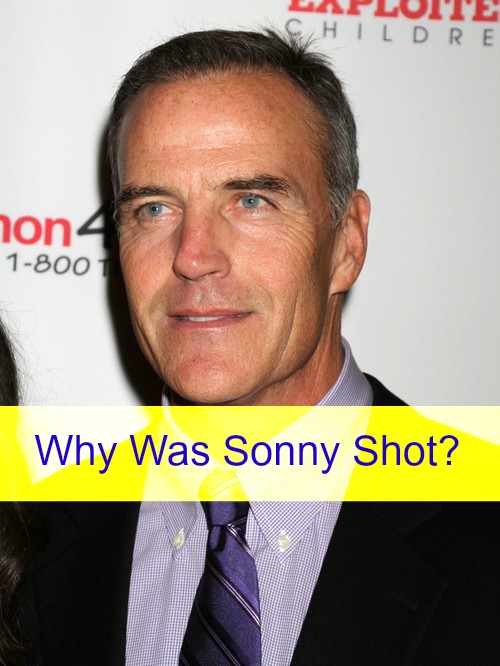 Check out this “General Hospital” spoilers post about why Sonny Corinthos (Maurice Benard) was a target for assassination – and it’s not what you may think… After catching the last few weeks of GH, you should be hip to the fact that Paul Hornsby (Richard Burgi) is the new big bad in Port Charles. Paul wants Tracy Quartermaine (Jane Elliot) and Dillon Quartermaine (Robert Palmer Watkins) to think he’s back in town to turn over a new leaf and spend time with family, but the truth is far from that.

In fact, it looks like Paul has a much more sinister reason for visiting his ex-wife and estranged son – he’s got mob, murder and mayhem on his mind. Paul was wrapped up with the DVX Cartel way back when and, after all these years, it looks like he’s now the man in charge and wants to claim Port Charles for the cartel and take over as city boss. So was the hit on Sonny just part of a territory grab? That’s what it may look like on the surface, but this could be a case of karma served to Sonny ice cold.

Anyone remember the name Karen Wexler? Many years back, Sonny convinced a teenage Karen to dance at his strip club – The Paradise Lounge – even though she was just 17. But even worse, Sonny turned Karen on to prescription drugs which turned into an addiction that would haunt her for the rest of her life. Turns out Karen was the daughter of Scotty Baldwin (Kin Shriner) which explains Scotty’s long-standing hatred of Sonny who had Karen stripping, drugged up, and sleeping with him, too.

But what does that have to do with Paul Hornsby, you ask? Well… Back then Paul was a legitimate Port Charles lawyer before he got wrapped up with the cartel. And one of the young people he worked with was Jagger Cates. Ultimately, Jagger and Karen ended up married, but Paul was close to Jagger and therefore, had ties to Karen. Plus, Paul has close ties to the Quartermaines, and Sonny has had some mega-dirty dealings with the Qs.

Sonny essentially stole Michael Quartermaine (Chad Duell) from AJ Quartermaine (Sean Kanan) and then, of course, Sonny killed AJ. And after Jason Morgan (Billy Miller) had his brain injuring accident, Sonny turned Jason into a killer who turned his back on his family. There is no love lost between the Quartermaine and Corinthos clans so it makes sense for Paul to also want to exact justice on behalf of the Qs.

The bottom line is when that black gloved hand fired the pistol and tried to take Sonny out of the game for good, it was not just about mob territory. And if Julian Jerome (William deVry) and Paul have been sharing war stories, the shooting could also have been designed to give Ava Jerome (Maura West) a chance to get back her daughter. Julian has been so traumatized by losing his son baby Leo that he didn’t want Ava to go through that pain and may have bargained for Sonny’s death to help his sister out.

Let’s be real – half of Port Charles has an interest in seeing Sonny dead on a warehouse floor – including the Police Commissioner Jordan Ashford (Vinessa Antoine), Quartermaines, Cassadines, Baldwins and myriad other citizens. But once again, the Teflon Don has cheated death and will be back on his feet soon enough. Well, maybe not back on his feet exactly – we may yet see Sonny paralyzed for quite a while.

But expect it to be quite some time before most of Port Charles figures out that Paul Hornsby masterminded Sonny’s shooting, the territory takeover, and other yet-to-be-revealed shady shenanigans. Can’t wait to see it all unfold. Be sure to check back with CDL often for more on this GH plot twist plus other “General Hospital” spoilers, gossip and more.