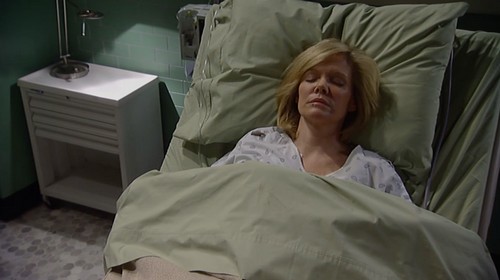 Check out these “General Hospital” spoilers for the ABC soap for Monday, March 2. The custody battle for little Avery Corinthos is heating up. On Friday, we heard from Michael Quartermaine (Chad Duell) about the dangers of being the child of Sonny Corinthos (Maurice Benard) and the trauma he experienced first hand. Michael didn’t stop there and even played the mental illness card to ice that cake. Ric Lansing (Rick Hearst) was just starting in on Michael when the show ended. This week we’ll hear from the Jerome side of the family.

Neither Julian Jerome (William deVry) or his back-from-the-dead sister Ava Jerome (Maura West) want Michael to get his hands on the baby, but they also don’t want little Avery in the hands of Sonny. That leaves just a couple of options – Ava kidnapping her baby and running off with it or Kiki Jerome (Hayley Erin) keeping custody. Julian will come to see Michael today to confront him about the custody battle. Julian doesn’t want his young niece used as a tool for Michael’s revenge.

Rumor has it that on the way to threaten Michael, Julian will run into an old enemy. Hmm. Wonder who it could be? My money is that it’s Carlos Rivera (Jeffrey Vincent Parise) and that Julian is going to threaten to (or even attempt to) kill him for trying to kill Ava. Needless to say, it won’t be a warm and fuzzy reunion. And this after Duke Lavery (Ian Buchanan) was just at Julian’s door making threats. Seems like Julian is the most popular gangster in town.

Kyle Sloane (Grayson McCouch) will come talk to Jake Doe (Billy Miller) who’s still in the hospital recuperating from brain surgery. Sloane will make an offer to Jake that has a number of strings attached. Wonder what it could be. Rumor has it that Jake will walk away from jail time conditionally. That means with Sonny, Julian, Helena Cassadine (Constance Towers) and Jake free, the only criminals still locked up will be Franco (Roger Howarth) and Luke/Fluke (Anthony Geary).

Jake will get another visitor – Elizabeth Webber (Rebecca Herbst) – who will reveal some inside info about her relationship troubles with Ric. Carly Corinthos (Laura Wright) will also spend some quality time with Jake this week. Neither Sonny or Ric will appreciate their ladies hanging out with the hot amnesiac, but what can be done about it.

Speaking of hot amnesiacs, remember how last week Olivia Falconeri (Lisa LoCicero) poured her heart out about her pregnancy to Franco when she thought he wasn’t lucid? Wonder how long it will take that to come back and bite her right in the booty. Now that Nina Clay (Michelle Stafford) is back in the nuthouse so she can spend quality time with Franco, will he share his secrets with her and tell her he’s both lucid and knows that Julian knocked up Olivia or will he continue to play her too? Rumor has it that he’ll reveal some things to Nina, keep some cards close to his vest and use Nina’s affection for him to further his plot.

And, speaking of Olivia being knocked up – this week she’ll have to come clean to her son Dante Falconeri (Dominic Zamprogna) about being preggers. The real question is will Olivia confess to Dante who really knocked her up or if she’ll lie and say it’s Ned Ashton’s (Wally Kurth) offspring. And now another emotional “General Hospital” spoiler – this week Silas Clay (Michael Easton) will tell Ava that although she deserves to be locked up for killing Connie, he won’t turn her in because he loved her once and still cares about her as the mother of his child.

Today’s episode should be a busy one for the citizens of Port Charles. Check back with CDL later today and every day for more “General Hospital” spoilers, rumors and casting news.