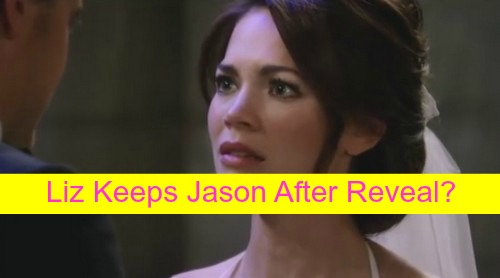 “General Hospital” (GH) spoilers reveal how we all saw the confusion on Jake’s face when he found out he’s Jason – but that this complex emotional mess is just getting started and it’s the kids that could be the deciding factor for the former mob hitman. The knee jerk reaction that Jake Doe (Billy Miller) has to the news that he’s Jason Morgan is anger.

Jake is in his tux ready to say ‘I do’ with Liz Webber (Rebecca Herbst) and he knows that can’t happen so he hates the information Carly Corinthos (Laura Wright) gave him. But later, once Jake thinks about all the kids involved, he just might do a 180 on what he wants.

But Jake has to wrap his head around the fact that he’s the biological father of not only little Jake but also of Danny Morgan. At the moment, Jake is focused on the fact that he has to deliver the #JasonRevealed news to Liz and their wedding guests.

The kids are not foremost in his mind at this point, but when he makes the announcement, will little Jake be back from his ice cream break and tell his father “I told you so”? In a simple numbers game, three is greater than one.

There are three kids at Liz’s house counting on Jake to be their dad and just one kid at Sam Morgan’s (Kelly Monaco) house. But that balance is precarious and relies on Jake’s assumption that Liz did not know he was Jason and is just as shocked as everyone else.

Those kids will be part of what keeps Jake tethered to Liz for now, but could also be the wedge that drives him away from her later. Once Jake finds out that Liz knew that he was Jason Morgan, he will also know that she deliberately kept him from his two biological children – Danny with Sam and little Jake with her.

Jake loves those boys – all of them. And he will be so hurt to know that Liz kept him from bonding with little Jake and Danny for so long.

What is the glue that could very likely keep Jake with Liz instead of Sam for the moment, will also be the sticking point for Jake when Liz’s lies are exposed. If Liz was brave, she would throw herself on Jake’s mercy right now and beg him to forgive her and tell him she didn’t know at first and then when she found out, she loved him so much already she couldn’t give him up.

But Liz won’t do that – especially not when she watches him begin to choke Nikolas Cassadine (Tyler Christopher) to death in his anger.

If Jake does decide the kid issue is too much for him to handle and walks away from Liz, will he also try and take little Jake with him? Liz could end up with the double heartbreak of losing big and little Jake because of her lies and how horrible would that be?

We do know that Jake will be pulled in many directions by both Sam and Liz – and their children – once the reveal is made. Aiden and Cameron love Jake and want him as their dad, but the reality is, he’s also dad to Danny. Poor Jake…

Be sure to check with CDL all weekend long for more “General Hospital” spoilers on the Jake reveal as well as spoilers for Monday’s show and a look ahead at all of the action coming next week in Port Charles.