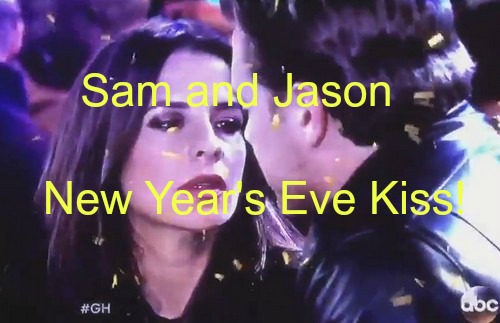 “General Hospital” (GH) spoilers tease that Sam Morgan (Kelly Monaco) may yet land her man Jason Morgan (Billy Miller) and it could all come down to a New Year’s kiss. Other GH spoilers hint that Jason will soften towards Liz Webber (Rebecca Herbst) at the holiday Gala.

That’s true but that doesn’t mean that Liz will win Jason back. In fact, even though Jason may be toying with the notion of reconciling with Liz, despite her lies, over Christmas, he will get returned memories of his life with Sam.

Before, when Jason saw flashes of his former life, it was like looking at photos of strangers. This time, though, the memories will trigger emotions that have been buried down deep in Jason for a long time. It looks like the love he felt for Sam is returning.

Of course, that will have to combat the new love he feels for Liz, but still, it means a lot. And GH spoilers clearly show that Sam and Jason will be together on New Year’s Eve at an event and they share a kiss. Will this kiss unlock even more memories for Jason?

The first time Sam kissed him – at Patrick Drake’s (Jason Thompson) house – nothing sparked with Jason because he had a boundary up due to his relationship with Liz. But now that Jason has stepped away from Liz, there are no walls up.

That, combined with the memories he recovers, could lead to a life-changing lip lock for the lovelorn pair in coming days. Is that New Year’s Eve kiss the beginning of a new year of life together for Sam and Jason?

To be sure, there are complications coming. Little Jake Spencer (James Nigbor) doesn’t want his dad to get back with Sam and he’s going to act out in disturbing ways. But as we’ve seen, Jason will do what Jason wants to do and what he feels is right.

And if he wants to be with Sam, he’ll tell his son that’s just the way it is and that he’ll still be his dad. In fact, if Jake’s actions put Sam in danger and Jason has to rescue Sam, it could further heighten the emotions he’s feeling for his wife.

This sparks questions – how far will the New Years’ kiss go? Is it a small kiss, a lingering breathless exploration, or a passionate make out session that could lead them to get intimate with each other? And the other important question is – will Liz see the kiss? Is she also at the party?

Don’t miss a moment of the upcoming GH episodes – so much happening post-Christmas and into the New Year. And be sure to check back with CDL often for tons of hot “General Hospital” spoilers, news and more!