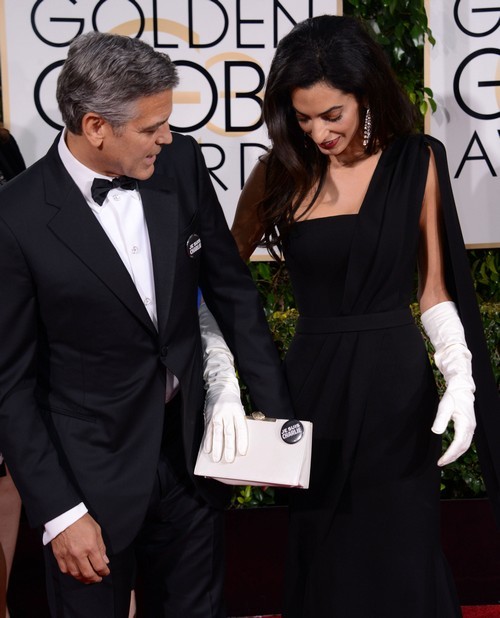 George Clooney and his charming wife Amal Alamuddin are nearing divorce according to reports and rumors but one outlet says otherwise. George Clooney and his wife Amal Alamuddin are trying to get pregnant and have a baby – or so claims the March 9th cover of Closer Magazine. The infamous Hollywood bachelor wed high-profile human rights attorney Alamuddin in November 2014 during an extravagant Italian wedding. Just three months in to their marriage Amal and George Clooney are rumored to be fighting non-stop and having a tough time seeing eye-to-eye on anything, and the odds of them making it through 2015 without getting a divorce are slim to none.

The March 9th edition of Closer Magazine claims that George Clooney and Amal Alamuddin’s marriage is perfect, so perfect that they are preparing for a baby and starting a family of their own. The report goes on to say that, “Amal says absence makes the heart grow fonder, she and George really anticipate being together and they don’t argue as much because they know their time together is limited. They agreed that they would have to spend time apart to concentrate on their busy careers. They’re always on Skype when they are on different continents, that makes them feel closer.”

Is there anyone who is buying Closer’s absurd story of George and Amal’s blissful marriage? It’s no secret that George and Amal have been fighting non-stop over everything, including whether or not they will have a baby. Just a few weeks ago George and his wife were at odds because she wanted to start trying to get pregnant and he put the brakes on her plans and said he wasn’t ready for a baby. George and Amal literally see each other once a month, and when they are together they are out boozing with George’s Hollywood friends (whom Amal hates) or walking the red carpet for an event – when would they have time to play house with a new baby?

What do you think about George Clooney and Amal Alamuddin’s marriage? If you had to put money on it – how much longer will they last before they get a divorce? Do you think they are really trying to get pregnant? Let us know what you think in the comments below!