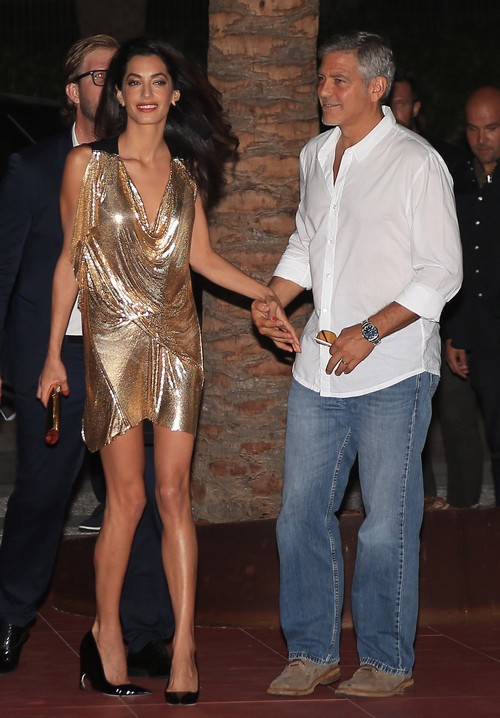 George Clooney and his wife Amal Alamuddin have baby fever, and are determined to get pregnant before the year is up. Despite multiple divorce rumors, George and Amal somehow managed to defy the odds, and will be celebrating their 1 year wedding anniversary on September 27.

Now, that they have made it through the first year of marriage the actor and attorney seem to think that they are in the clear – and it is time to start trying to get pregnant. But, there is one problem – “George’s geriatric baby batter.”

According to a report from Star Magazine, George’s age is causing some concern in the baby-making process, and there are fears that his little swimmers are too old to make the swim. The tabloid explains, “But at the not-so-tender age of 54, the Ocean’s Eleven star may have challenges ahead in the procreation department, meaning his prime baby-making years being long-gone might affect their desire for a baby.”

George’s age combined with his wife Amal’s super skinny and borderline unhealthy body means that producing a mini Clooney-Alamuddin baby is proving much harder than they anticipated. The couple is determined though, and they have millions of dollars at their expense, so they are willing to do whatever it takes to get pregnant – including visiting the top fertility clinics and IVF treatment centers in the world.

George’s “geriatric baby batter” (seriously, whoever coined that phrase at Star deserves a raise) – is really the least of their problems though. If Amal and Clooney do get pregnant and have a baby, who is going to take care of it – and where is the baby going to live? Amal and George have spent literally 3 months together tops since their wedding, they hardly ever see each other. If they are too busy to see their husband and wife, when are they going to see a baby? What do you think of George and Amal’s baby plans? Will they give up their busy careers for their family? Let us know what you think in the comments below!