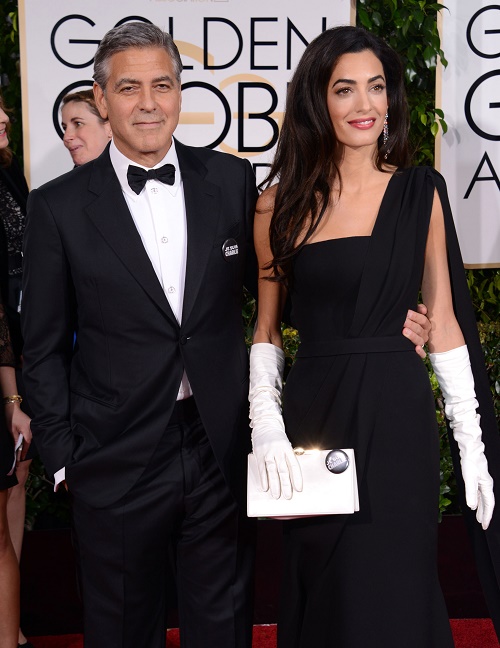 George Clooney and Amal Alamuddin have been married for less than six months, but divorce rumors have already started to circulate about the couple. It seems as though Amal’s stint as George Clooney’s arm candy/showpiece wife has come to an end, since she’s quickly returned to London and has dived back into her law career. George, meanwhile, is reportedly working on a movie in Los Angeles, which means that he and Amal are engaged in a long distance relationship not even one year into their marriage.

Considering the success rate of successful celebrity marriages – and then combining that with the success rate of successful long-distance relationships – I would say that a divorce within two years looks very likely. Plus, rumor has it that staying away from Amal Alamuddin has already started to give George Clooney a case of the wandering eye. I mean, a tiger doesn’t change its spots, and notorious womanizing bachelors don’t suddenly become celibate. We’re not suggesting that George Clooney is cheating on his wife, but at the same time, looking and touching are two very different things – even though one usually leads to the other. And knowing George’s history with women, it’s hard to see how he’ll be able to stay away from his wife and not even glance at anyone else.

Obviously, having a wandering eye in Hollywood is nothing new, and for all we know, George and Amal have an open marriage arrangement. However, I sincerely doubt that they do have that sort of arrangement, and in fact, sources are claiming that this break will actually do George and Amal some good. They’ve reportedly been getting into some serious fights recently, most notably over their separate careers and the decision to start a family. Neither Amal nor George is willing to take a break from their career, especially Amal – and if they have a kid, that will necessitate that Amal spend some time away from her budding law career. And does Amal strike you as the type to throw away a bright future because of the man she married? Nope, not even a little bit.

What do you guys think? Is George Clooney’s wandering eye/cheating and Amal’s reticence to start a family serving as cogs in a future divorce? Or is all just hoopla without any substance? Let us know your thoughts in the comments below.