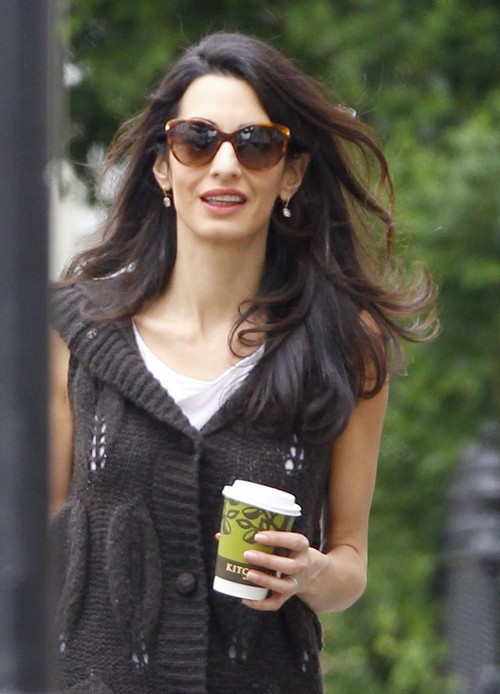 George Clooney and Amal Alamuddin have been rumored to be on the verge of a divorce for months now because of their non-stop fighting, and now we can add another item for them to fight about to the lengthy list. When George and Amal aren’t bickering over his partying, the Hollywood pals he refuses to cut loose, where they should live, their work schedules, and whether or not Amal should get pregnant – they apparently fight over who is more successful, and has a bigger following. The problem with marrying George Clooney – is you are not under any circumstances allowed to upstage George Clooney.

The June 15 edition of Star Magazine reveals that George Clooney is having a tough time with his latest film Tomorrowland turning out to be a huge flop – and the fact that Amal Alamuddin is getting more attention than he is, is just adding fuel to his fire. An insider dished to Star, “George isn’t used to playing second fiddle. He acts as though he is laid-back, but he is very irritable at the moment. He never imagined he would feel overshadowed. Now it is happening and he has discovered that he doesn’t like it at all.”
And, as predicted George’s insecurities about his wife’s new found fame and his plateauing career are causing a rift in their marriage. Star’s insider went on to explain, “He has a huge fear of becoming irrelevant. Amal tells him to stop being ridiculous, but he can’t help himself. He is starting to complain about petty stuff, and it is getting old.” George and Amal have enough problems in their marriage, it will be a miracle if they make it to their one year anniversary, the last thing they need is George’s ego getting in the way of them working out their already mounting issues.

Do you think that George Clooney is being petty? Or would you be upset too if you married a lawyer and she became more famous and relevant than you were? Will George Clooney and Amal’s marriage survive, or do you see them getting a divorce? Let us know what you think in the comments below!