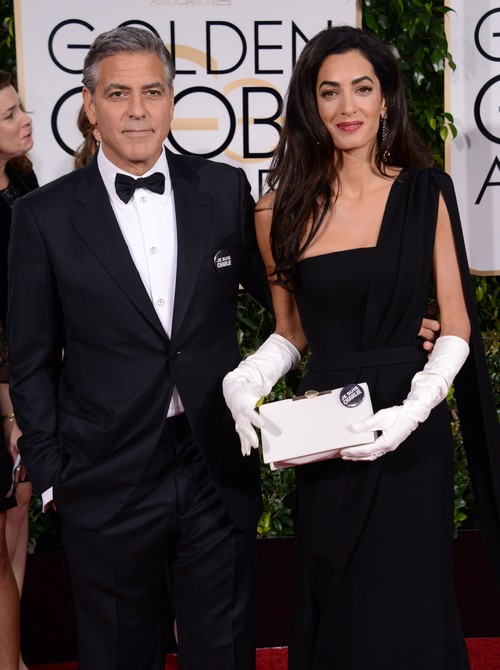 George Clooney received the Cecil B. DeMille Award for Lifetime Achievement at the Golden Globe Awards on Sunday, and he thanked his new wife, Amal Alamuddin, in his acceptance speech. Once a notorious bachelor committed to living out his days single and wife-less, George Clooney has changed gears so fast that it’s enough to give us whiplash. He was effusive in his praise of his wife, thanking her for supporting him and adding that he’s waited his ‘whole life’ for her.

He said, “It’s a humbling thing when you find someone to love. Even better when you’ve been waiting your whole life, and when your whole life is 53 years… Amal, whatever alchemy it is that brought us together, I couldn’t be more proud to be your husband.”

Awwww. You know, whatever your feelings are about George Clooney and Amal Alamuddin, there’s no denying that he genuinely loves his new wife. Sure, she’s lost a lot of her appeal after she’s gone all Hollywood, but there’s a reason that George Clooney finally settled down – and it’s because he finally found someone who wasn’t a typical Hollywood starlet [no matter what she’s becoming now].

Of course, we can argue and argue about whether George Clooney is actually deserving of the Cecil B. DeMille award, especially at the ripe old age of 53 years old [not]… Regardless, he’s always one of the few people in Hollywood that’s completely game for anything people throw at him, and for that, he should be commended. He’s worked hard at making good movies, even if that doesn’t always work out – and purely for that, it’s enough to throw my support behind the guy. I’ll take Monuments Men – no matter how shitty – over Transformers 4 and 5 any day.

What do you guys think? Were you moved by George Clooney’s speech honoring his wife, Amal Alamuddin, at the Golden Globe Awards? Or did you feel like it was put on for effect? Let us know your thoughts in the comments below.