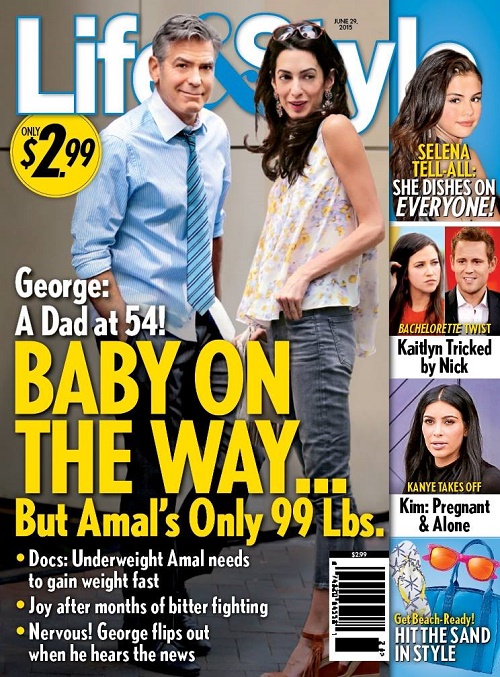 Is George Clooney’s wife Amal Alamuddin pregnant with baby number one? George and Amal have been fighting like cats and dogs, and on the verge of a divorce for months. Clooney made it very clear in a recent interview that starting a family and having babies was the last thing on his mind, and the couple literally spends about one week out of a month together. But, according to the June 29 cover of Life & Style Magazine, 99-pound Amal is pregnant.

The June 29 cover of Life & Style Magazine features a photo of George Clooney and his wife Amal, and the headline reads: “George A Dad At 54! Baby On The Way…But Amal Is Only 99 Pounds.” The cover goes on to tease that doctors are concerned about underweight Amal is and she needs to “gain weight fast.” Oh and, “Nervous George flipped out when he heard the news.” Of course George would “flip out,” he doesn’t want to have kids and he and his wife are one catty argument away from a divorce.

The odds of an older 99-pound woman who barely sees her husband long enough to have sex with him getting pregnant are slim to none. Amal Alamuddin’s unhealthy weight would make it nearly impossible for her to conceive, even if they were actually trying to get pregnant. According to Life & Style’s inside sources, it was obvious that Amal is pregnant because when she travelled to George’s family reunion in Kentucky with him she was “beaming” and George looked “so proud.” Really? Maybe George was just smiling, and Amal’s make-up was on point that day. Since when does “beaming,” mean someone is pregnant?

Life & Style’s obviously misinformed inside source went on to say, “George can’t wait to start a family, but he is stressed. Amal knows it’s not healthy, and she has promised she will gain the weight necessary.” Gaining weight is the last thing on Amal’s mind. George’s wife has become very vain over the last few months and underwent plastic surgery and reportedly hired a personal stylist. No woman that is that concerned about her appearance would be willingly trying to gain weight.

Do you think that Amal Alamuddin and George Clooney will ever have children? Or will their marriage be over long before there is a baby bump? Let us know what you think in the comments below!