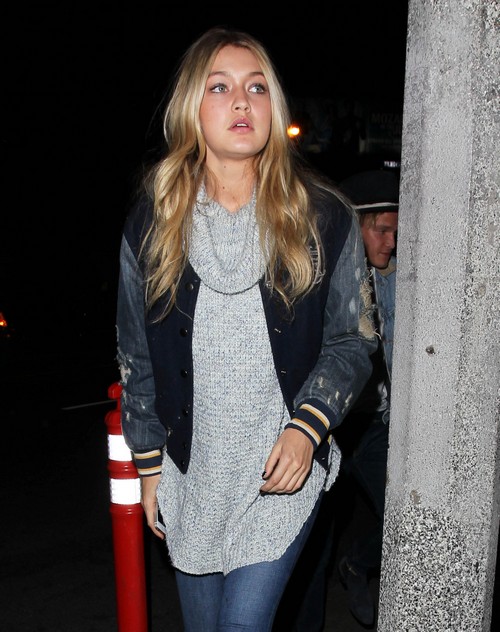 Gigi Hadid has banned “Old” Khloe Kardashain and “Slutty” Kylie Jenner from partying with her friends according to a new report. Gigi Hadid has risen to young Hollywood infamy over the course of the last few months, certainly her on-again off-again flings with Justin Bieber helped. Now the model and daughter of Real Housewives of Beverly Hills star Yolanda Foster is being dubbed the Queen of Young Hollywood, and Cody Simpson is her royal majesty’s King. According to a new report in the February 9th edition of Star Magazine, Gigi Hadid rules her Hollywood Brat Pack with an iron fist – and has exiled some major celebrities from her circle, including her BFF Kendall’s sisters Khloe Kardashian and Kylie Jenner.

Star Magazine reveals, “Model Gigi Hadid and Cody Simpson have become the king and queen of young Hollywood, but not everyone is welcome in their court. Whatever they are doing is automatically what everyone else wants to do, but Gigi pretty much dictates who can and can’t hang out with them based on looks, reputation, and wardrobe. Gigi has no problem banning good friends from parties, but she does it so diplomatically that she pulls it off.”

One of Star Magazine’s inside sources revealed that Kylie Jenner and Khloe Kardashian are at the top of Gigi’s “Not Hot” list. Apparently Gigi thinks that Khloe is “too old and desperate for attention,” and “Slutty” Kylie Jenner “used to date Cody, so Gigi doesn’t trust her.” It is kind of funny that Kendall hangs out with Gigi 24/7, and is totally okay with her “friend” banning her two sisters from all of their outings. Mindless sheep…anyone? To add insult to injury, one of the people Gigi always invites to party with her is Miley Cyrus. So, Kylie and Khloe are out because they are desperate for attention and she is scared they will steal Cody – but she isn’t worried about Miley Cyrus?

Are you surprised that Gigi Hadid is running the show? Did you ever picture her as a mean girl, or did you think she was sweet when she used to appear on RHOBH with her mom? How ridiculous is it that Kendall is totally okay with Gigi banning not one, but two of her sisters from hanging out with them? Let us know what you think in the comments below!