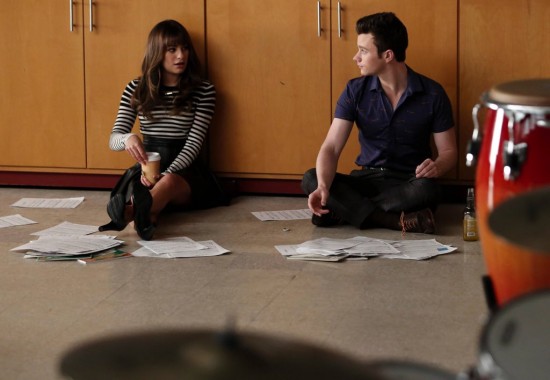 Glee returns to FOX tonight for an exciting all new Friday, January 16 season 6 episode 3 called “Jagged Little Tapestry” and we have your weekly recap below. On tonight’s episode, co-directors Rachel [Lea Michele] and Kurt [Chris Colfer] throw themselves into rebuilding the glee club at McKinley, while Becky [Lauren Potter] introduces her new boyfriend to a very concerned Sue [Jane Lynch].

On the last episode, after Rachel’s humiliating failure as TV actress, she came home to Lima to figure out what she wanted to do next. Upon discovering that Sue had banished the arts at McKinley, Rachel took it upon herself to reinstate and lead the Glee Club. Meanwhile, Blaine, no longer in a relationship with Kurt, had moved home to coach the Warblers while Will was coaching rival Vocal Adrenaline, and Sam was the assistant coach for the McKinley football team. Then Puck, Quinn, Santana, Mercedes, Brittany, Artie and Tina all returned to McKinley for Homecoming and helped Rachel and Kurt recruit for the new glee club. Did you watch last episode? If you missed it we have you covered, we have a full and detailed recap right here for you.

On tonight’s episode as per the FOX synopsis, “Rachel and Kurt struggle as they try to rebuild and co-direct the glee club at McKinley. Meanwhile, Sue is concerned when Becky brings her new boyfriend to town.”

Kurt is having a tough time being back home on tonight’s new episode of “Glee”. He thought he would get Blaine back and sadly that plan never even had a chance to even get off the ground. So then he looked towards glee club to be the light in his otherwise dark life. Yet there was Rachel to contend with because while he thought they would be embarking on a partnership – it seems no two divas can control the same stage.

The two new directors of glee club just can’t agree on anything. So eventually they managed to compromise. They agreed that during their “Breakup Album Week” they would be covering Jagged Little Tapestry which is a mashup of “Jagged Little Pill” and “Tapestry”.

And that was a wonderful idea. But then Brittany and Santana (former gleekers decided to stick around an extra week) decided to go first. And at the end of their performance – Santana proposed which was beautiful and then beautifully ruined by Kurt.

Kurt told them they should have learned their lesson from him and Blaine. He said they were too young to get married and later on Santana got him back for that. She found him after glee club had been disbanded for the day and basically tore into him. Because it not their age that ruined Blaine and Kurt. It was Kurt that destroyed that relationship.

Brittany though wasn’t as bitter towards Kurt. So she tried to warn him. Brittany told him Blaine and Karofsky are planning on moving in together. And she also told him that he shouldn’t hang all his hopes on getting Blaine back. He should find ways to be happy that don’t rely on the improbable.

Meanwhile, the glee club had on more important thing to do this week and that was helping Becky. Becky had told her boyfriend that she used to be a part of glee so she wanted Tina and Quinn’s help in faking it. And they were fine with that but when they met her boyfriend (someone who doesn’t have Down Syndrome) – they became worried. So they went to Sue.

The ladies were all worried this “normal” guy was using Becky. But he ended up turning their own words against them. He said they were the ones in the wrong for not seeing that Becky deserves a normal life as possible.

Becky’s boyfriend made Sue feel like a horrible friend. Although, she eventually redeemed herself with Coach Beast. It seems the coach has been hiding the fact she’s been taking medication. And one of the footballers was going to use her sudden illness (whatever it is) against her.

Spencer wanted to become the star quarterback and the coach was standing in his way. So he told Sue to fire her and Sue did the opposite. She investigated the Coach herself and once she found out Beast was sick (supposedly with cancer) – she told Beast she was going to stand by her no matter what.

So Spencer’s plan failed and so did Becky’s.

Apparently, she’s stage shy so even faking being a singer didn’t come easy to her. So she was forced to come clean with her boyfriend who so far has liked her for exactly who she is. And surprise, surprise he didn’t mind he she lied about her past.

When people actually care about someone then they’re willing to forgive. And Coach Beast found that out for herself. Her story about cancer was a like but it was easier for her to admit to that than the truth. The coach is getting a sex change.

And though she lied, Sue still stuck by her. She told Beast he has a job waiting for him if he ever decides to come back.

As for glee club, it had its rough patches with Kurt and Rachel both in charge but ultimately they made just as a great of team as when they originally won regionals. And that’s how they know where they want to take this new glee club!