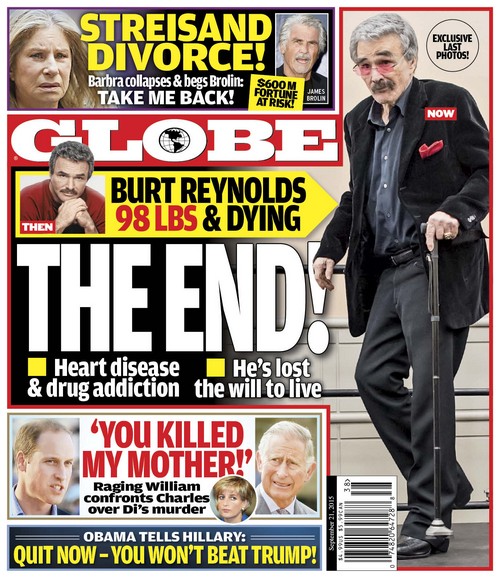 Iconic American actor Burt Reynolds turned 79 years old in February 2015, and the movie star’s age is rapidly catching up to him. According to a new report, Burt Reynolds is sadly knocking on death’s door and his days are numbered. When you are pushing 80 years old, health problems are to be expected, but according to this week’s edition of GLOBE Magazine – Burt has “lost the will to live.” The all new cover of GLOBE features of a photo of a frail and barely recognizable Reynolds and the headline reads, “The End: Heart Disease & Drug Addiction.” The cover goes on to tease that the film star is down to a shocking 98 pounds!

In other celebrity gossip news, this week’s cover of GLOBE Magazine also features an inside story on songstress Barbara Streisand’s marriage woes. It’s no secret that Barbara and her husband James Brolin have been having issues – but they are apparently on the verge of a $600 Million divorce. The magazine teases that Streisand “collapses and begs Brolin to take her back.” It’s unclear whether she truly wants her husband back, or she is just trying to protect her hundreds of millions of dollars.

Our friends at GLOBE Magazine always have exciting and exclusive stories about the scandalous royal family, and this week is no exception. GLOBE recently revealed that new evidence had been discovered in Princess Diana’s tragic death that supported the theory she was murdered, and it the car accident was all a cover up orchestrated by the royal family. This week’s cover of GLOBE Magazine, teases an exciting story about Prince Williams – the future King confronted his father Prince Charles and allegedly accused him of killing his mother!

So, are you as worried about Burt Reynolds as we are? Will Barbara Streisand and James Brolin be able to patch up their marriage or is a divorce inevitable? And, what do you think about the theory that the royals were responsible for Princess Diana’s death? Was it really a cover-up? Let us know what you think in the comments below and don’t forget to pick up this week’s September 21 edition of GLOBE Magazine as soon as it hits the newsstands!