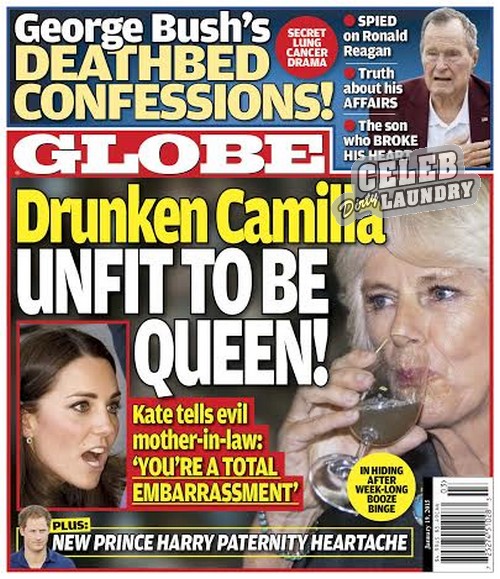 The pressure of the Royal Family, her almost-Queen duties, and Kate Middleton’s ever-growing popularity seem to be smothering Prince Charles’s wretched second wife Camilla Parker-Bowles, and she has officially cracked under the pressure. You would think that Camilla would be on top of the world after Queen Elizabeth recently revealed she was stepping down from the throne and handing the Royal reigns over to her and Prince Charles, not Prince William and Kate Middleton. But, the soon-to-be-queen appears to be more stressed than ever and has reportedly turned to the bottle and begun drinking away her worries.

Our friends at GLOBE Magazine are always willing to boldly go where no other outlet dares when it comes to the scandalous Royal Family. The January 19th cover of GLOBE Magazine announces, “Drunken Camilla Unfit To Be Queen: Kate Tells Evil Mother In Law You’re A Total Embarrassment. In Hiding After Week Long Booze Binge.” During the holidays Camilla Parker-Bowles missed Queen Elizabeth’s Christmas Day Church Service because of “health issues,” but we all knew it was because she was drunk and/or hung-over. Camilla’s drinking problems have never been a secret, and apparently the stresses of her feud with Kate Middleton have pushed Prince Charles’s wife right back off the wagon.

In other Royal Family scandal news, the January 19th cover of GLOBE Magazine also teases “New Prince Harry Paternity Heartache.” Prince Harry’s paternity has been questioned since the day Princess Diana gave birth to him, or possibly the day he debuted his bright red hair. A popular theory that has remained solid over time is that Prince Harry is not Prince Charles’s son, but actually the product of an affair between Princess Diana and James Hewitt.

Personally, we can’t wait to see what the Royal Family plans to do with Drunk Camilla – and as soon as this week’s GLOBE Magazine hits the newsstands we will be running out to get a copy so we can dish all the dirty details. So, what do you think of Camilla Parker-Bowles falling off the wagon… again? Do you think that she will still be named the next Queen? Does this mean Kate Middleton is a contender for Queen again, if Camilla is unable to conduct herself in a Royal manner? And, what about Prince Harry’s paternity drama? Do you think he is Prince Charles’s son, or James Hewitt’s? Let us know what you think in the comments below!