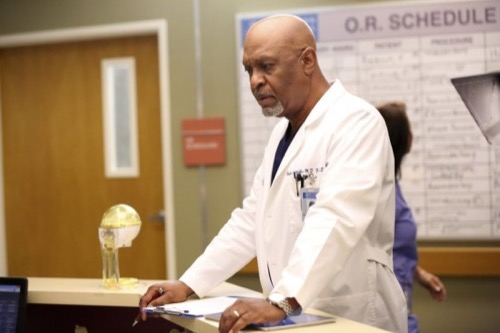 Tonight on ABC Grey’s Anatomy returns with a great all new Thursday October 1, season 12 episode 2 titled “Walking Tall.” On tonight’s episode, Bailey (Chandra Wilson) begins her first day as chief of staff and feels the pressure that accompanies the position.

On the last episode, in the 12th-season opener, Meredith adapted to new roommates. Meanwhile, Jackson got ready for April’s return; Bailey battles to be chief of surgery; and two young patients propel the doctors to re-examine bullying scenarios from their own pasts. Did you watch the last episode? If you missed it, we have a full and detailed recap right here for you.

On tonight’s episode as per the ABC synopsis, “Bailey begins her first day as chief of staff and feels the pressure that accompanies the position. Meanwhile, April finds her marriage is in peril; Meredith has trouble balancing her many obligations; and Amelia tries to define what she has with Owen.”

This episode looks like it is going to be a great episode and you won’t want to miss it, so be sure to tune in for our live coverage of ABC’s “Grey’s Anatomy” Season 12 Episode 2 at 9 PM EST!

Bailey has dreamed of becoming Chief one day however that dream of hers has now become reality. And reality doesn’t always live up to expectations. So Bailey felt that she had to toughen up, especially on her first where she’ll make impressions on her staff, but there was one problem with that? Bailey was always strict to begin with.

Thus, on her first day, Bailey ended up ruining her own party. Richard had asked all the residents to come in for a surprise congratulations breakfast. And because it was a surprise, Bailey was told that it was just another weekly meeting.

She came in and saw everyone waiting for her. And without giving Richard a chance to show her the cake or even the breakfast spread – she told them that she had cancelled these weekly meetings because she would prefer it if they were out there saving lives rather than talking about it.

And there went the celebration in her honor.

But that’s not the only place Bailey is being a ball buster. Before her latest promotion, she pushed off all of her patients onto Meredith. As well as giving Meredith an anatomy class. So Meredith is drowning in work and she’s taking out on Stephanie. Stephanie is supposed to be Meredith’s number two yet she’s being treated like a lackey.

Though she doesn’t appear to be the only one that’s struggling under the new regime. Bailey seems to be pushing everyone to their full capacity. And then some. Yet a recent case involving a woman that has a tumor that makes her keep growing is just another factor that has been frustrating Bailey in her new positon.

Jade came in because she felt dizzy and had blacked out. But Jade is also 7’2 and continues to grow by the day. So if the tumor is not removed then there was a chance her spine would eventually snap under the pressure.

Hence Jade needed surgery. And not next week when she became a little more available. She needed the surgery right then and there. However she was refusing to have it. She said she didn’t have time and that she was only willing to give Bailey four hours to come up with a surgical approach that would fix everything in one go and have recovery time of a week.

And although that was humanly impossible, Bailey dragged several of her top residents from their own cases to put them on Jade’s.

She did that once before to Meredith when she dropped all of her old patients into Meredith’s lap. Yet that’s wasn’t a one-time thing. That was actually just her personality. So when that tidbit dawned on the rest of them, no one was particularly happy that she decided to treat all of her residents that way. It just made everyone remember her old nickname “the Nazi” and, when that got back to Bailey, it suddenly made her regret even taking the job.

No one wants to be known as a dictator. In fact Bailey wanted to portray confidence on her first day on the job. And so it hurt her that all she got in return was a lot of hateful stares.

Jade later collapsed before she got the chance to leave the hospital. So she fell on Jo on her way out. And it was all hands on deck to rush the patient into the OR and help out their fellow doctor. Though there did seem like there was some form of competition in who could assist Jo first.

One of the interns has a slight crush on her and he sort of took it personally that he wasn’t the one to rescue her from out underneath someone else.

Anyways, though, Bailey did come to realize that she had been treating her staff poorly and she was almost on the brink of giving up. But then Richard stepped in. All day he had wanted to be there for Bailey and offer her whatever advice he could. And she didn’t necessarily give him the time of day until she had to.

But Richard didn’t take that to heart. He simply talked to Bailey as he used to. Back when he was the teacher and she was the student. Because in a way that’s what they were again seeing as she needed help in figuring out how to be chief.

And with Richard’s help, Bailey apologized to her staff for the way she acted. Then she told them that she’ll do better tomorrow.

However, there isn’t always a tomorrow for some people. All last season we watched Jackson and April struggle with their marriage and tonight he told her he didn’t think their marriage was worth fighting for. So Jackson looks like he’s ready to walk away and, funnily enough, April is now the one that wants to fight for their marriage.

So we’ll see how that goes and in the meantime all that hard work that Meredith was forced into doing finally paid off.

Meredith was made Chief of Surgery.