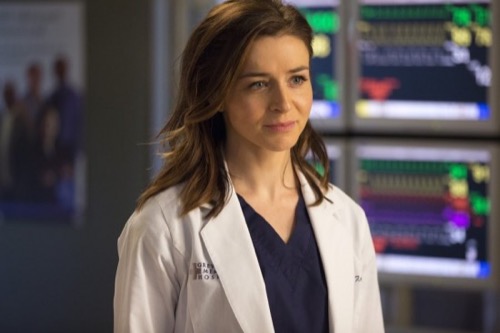 On the last episode, Maggie reflected on her life when her old beau got married. Meanwhile, Bailey’s allegiance was questioned by Richard; Jo told Stephanie a secret she’s been hiding from Alex; and Alex faced a tough decision regarding newborn twins. Did you watch the last episode? If you missed it, we have a full and detailed recap right here for you.

On tonight’s episode as per the ABC synopsis, “Owen suggests the interns learn a vital lesson on how to break bad news to patients’ families, and Arizona’s 90-year-old patient reassures her that she’s destined to find love again. Meanwhile, the sisters completely forget about the dinner party they’re hosting for everyone.”

This episode looks like it is going to be a great episode and you won’t want to miss it, so be sure to tune in for our live coverage of ABC’s “Grey’s Anatomy” Season 12 Episode 4 at 8 PM EST!

The hospital had a Silver Flood. And although a Silver Flood is referred to as many things such as a fracture feast by some, in actuality it’s an overcrowded Emergency Room after a shuttle bus carrying senior citizens crashes.

And there’s even a reason it’s been given a code name. One of the interns showed up in the ER and was surprised by the number of senior citizens. So he asked his superior why didn’t they just say old people and was consequently scolded by said senior citizens who took offence at being called old.

Hence the name Silver Flood. No one gets offended and it is a pretty cool name for an awkward situation. The older patients tend to put up more of a fight when it comes to their treatment and occasionally a patient might lie about taking Viagra. And yet the bottom line is that ultimately it’s the doctors that are held responsible for whatever happens to their patients.

And that’s why in these cases its all hands on deck.

Only interns can make mistakes and one of them ended up creating a problem that Owen had to fix. A patient had died after what seems like lying about the medication he was on. So the intern on the case just didn’t understand – why would someone lie when they were warned about possible side effects with their treatment? And unfortunately the intern took his confusion and accidentally voiced it to the deceased man’s son.

First off, it wasn’t his place to notify the family and despite the son’s desperation in wanting to know what happened it still wasn’t the intern place to tell the family that patient lied about their condition. That only upset the son and he lashed out at the man that called his father a liar. So that’s why the grieving should be handled by the experts.

However interns weren’t the only people to butt heads with their superiors. Stephanie was supposed to be following Amelia’s orders when it came to their patient Rachel Bloom and she ignored them when she began feeling uncomfortable. Thus Amelia had to pull her aside to find out what was going on.

Their patient recently had surgery and there was going theory that the faster they’re brought to their feet will show in how quickly they heal. So getting their patient to stand, regardless of the pain, was in their patient’s best interest. But something about pushing someone like that made Stephanie upset.

And it turns out that Stephanie has had some experience with what Rachel was going through. She told Amelia that she had sickle cell anemia and when she was 5 the doctors conducted an experimental treatment on her. Everyone had said it was for her own good but that hadn’t mattered to the 5 year old. She just wanted them to stop with the needles and to have no one strap her down.

Then she said she couldn’t subject someone else to what she had been through. So Amelia understood her position but Jo later accused Stephanie of lying. She told her friend that she couldn’t use a sob story to work the system and asked her if she even had a conscience to make up a story like that.

Though Jo didn’t stop at accusing her friend. She then went on to tell Amelia that Stephanie had been lying and she intentionally said that so Stephanie wouldn’t get invited to Meredith’s dinner. Which she was what she believed Stephanie was wrangling for by telling Amelia that story.

Meredith was going to be throwing a dinner for all of her friends and her friends just happen to be the heads of most of the departments. That’s why earlier Stephanie said she was jealous of Jo. Jo was naturally going to be Alex’s plus one and Stephanie told her that if she befriended everyone there then her career would be sent at the hospital.

So that explains Jo’s suspicion but Stephanie really was telling the truth. The doctor that had treated her at St. Jude’s children hospital had called Richard when he found where Stephanie was going to be working and he told the other man about how proud he was of his former patient. And was thankful to see how far she come.

And back in the ER, Owen made all of the interns go through a notification to the family. Particularly as that earlier incident had shown how incredible ill-prepared they were. Though they continued to fail at the lesson he laid out for them and Meredith had to step in.

She told them that they weren’t simply spouting words. They were telling people the worst possible news of their lives and thus should show the proper respect when doing so. And in the end it looks like she helped Maggie’s fling.

Maggie had woken up from her one-night stand and instantly regretted sleeping with an intern. Yet DeLuca had made her ache in parts she hadn’t known about. So she stopped fighting about what she should and merely gave into her feelings which involved sleeping with DeLuca again.

But Meredith’s dinner party was full of people that didn’t want to speak to each other. Including Arizona who dreaded meeting Callie’s new girlfriend, April who didn’t want to fight again with her husband about a divorce, and Stephanie who couldn’t bare to look at Jo.

And unfortunately Callie’s new girlfriend was also the doctor on the late Derek’s case.