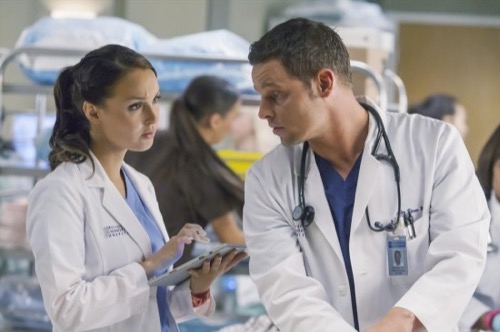 Tonight on ABC Grey’s Anatomy returns with a great all new Thursday January 29, season 11 episode 9 titled “Where Do We Go From Here?.” On tonight’s episode, Derek prepares to move to Washington, D.C., and Meredith deals with this by keeping busy at work. Meanwhile, Jackson [Jesse Williams] and April [Sarah Drew] receive some troubling news; and Arizona [Jessica Capshaw] and Amelia devise a plan regarding the best way to approach Dr. Herman.

On the last episode, Maggie and Meredith disagreed with Derek about the best way to approach a patient’s case, which lead to a bigger argument between the couple. Meanwhile, Callie felt responsible when one of her veterans was pushed too far and one doctor’s routine procedure results in a devastating diagnosis, on the winter finale. Did you watch the last episode? If you missed it, we have a full and detailed recap right here for you.

On tonight’s episode as per the ABC synopsis, “As Derek prepares for his move to DC, Meredith keeps herself busy at the hospital. Meanwhile, Jackson and April deal with difficult news, and Arizona and Amelia discuss how to best approach Dr. Herman.”

This episode looks like it is going to be a great episode and you won’t want to miss it, so be sure to tune in for our live coverage of ABC’s “Grey’s Anatomy” Season 11 episode 9 at 8 PM EST!

Unfortunately, Meredith doesn’t know what comes next. She told Derek to just go if he wanted to go and he took her up on it but at the end of the day how is their marriage going to survive with her in Seattle and him in D.C.? Or, for that matter, how it can survive when they both want two separate things?

Plus, Derek didn’t even hesitate after he told Meredith he was going. He went straight home from the hospital and packed his bags as if there was nothing else that mattered. Thus he left his wife in the awkward position of having to explain his absence.

Which she did in the most unconventional way!

Callie had found out after she caught Meredith interviewing a potential nanny at the hospital and the rest of said hospital found out after Meredith blurted the news out during surgery. At the time she was working on a woman that had intentionally driven her own children off a bridge. And Owen, who had found out from Jackson that April shouldn’t be doing surgery much less on a woman that tried to kill her kids, came into the OR and forcibly pulled April out of the same surgery.

But the two women were suffering from two different situations. Meredith was recovering from a bruised pride. April on the other hand recently found out her baby wasn’t going to survive an hour at most after birth.

And April doesn’t know how to handle the news. She’s not talking to her husband Jackson even though he’s going through the same thing as her and then on top of that there are still people asking her whether or not she’s knows the sex of the baby. Which is what people generally ask when they see a heavily pregnant woman!

Elsewhere in the hospital, though, Arizona is dealing with the fall out of letting Amelia in on Dr. Herman’s secret.

Amelia believes she can get rid of the tumor, in its entirety, but she’s going to need Herman’s permission in order to follow up on that belief. Because, while Arizona is fighting for her mentor to live and secretly going through someone else’s medical files, Herman has already peace with her death. She’s simply at the point where she doesn’t want to spend the last few months of her life chasing after possible cures. She just wants to teach Arizona everything she knows about their small field of medicine then quietly pass away. Hopefully on a beach.

Yet, Arizona fought her on this. And she even dragged Jackson and April’s situation into her argument just to get Herman to see how selfish she’s being. As Arizona put it, if either Jackson or April knew there was a way out of early death for their baby then they would have happily have taken it. But Herman has merely given up.

And it wasn’t until after Arizona had phrased it that way that Herman saw how much of coward she was. She really had given up! So later she found Arizona and she agreed to the surgery. It seems, after she got her talking to, she decided to fight her tumor. Though, Amelia should be warned because Herman has some conditions before she actually goes through it.

Apparently Herman is going to hold off on surgery for the time being. It seems she’s going to wait until her tumor almost critical and that way she can still be herself.

If Herman goes through the surgery right off then she could die on the operating table, possible end up as a vegetable for the rest of her life, or (and this is the most farfetched) wake up completely healthy and in good condition. So, with those odds, she’s pushing surgery till the very last moment.

And as for April, she soon cracked after she heard the woman that had driven off the bridge had a tumor. The tumor had impaired her thinking and even her sight. So the accident was in fact not her fault. But that left April wondering why. Why would God do something like that to a good mother and will take her own child away before she ever gets a chance to know him.

So April and luckily her husband was there to hold her.

Meredith didn’t have that when she started to cry in front of total strangers, but she knew what she had to do when she couldn’t turn to Derek – she called him. And she told him they could still make their marriage work. The next part is going to be hard, as they both acknowledges over the phone, but Meredith and Derek are both willing to fight for their marriage.

And if that means they have to find a way to make it work long distance then so be it!