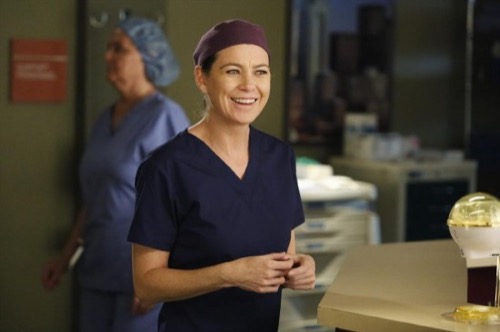 Tonight on ABC Grey’s Anatomy returns with a great all new Thursday February 12, season 11 episode 11 titled “All I Could Do Is Cry,” and we have your weekly recap below. On tonight’s episode, April and Jackson face a tough decision concerning their unborn baby. Elsewhere, Catherine encounters Richard [James Pickens Jr.] at the hospital; Meredith [Ellen Pompeo] searches for a babysitter so she can visit Derek; and Amelia tries a tough-love approach while working with Stephanie.

On the last episode, April stayed optimistic as Arizona began testing on her baby; Dr. Herman planned out a crash course in fetal surgery; and Owen and Callie encouraged each other to get back into the dating scene. Meanwhile, Meredith, Maggie and Bailey use the 3D printer to gain a better understanding of their patient’s tumor. Did you watch the last episode? If you missed it, we have a full and detailed recap right here for you.

On tonight’s episode as per the ABC synopsis, “after several discussions with Dr. Herman, April and Jackson must face their situation head on and make a difficult decision regarding their unborn child. Catherine arrives in Seattle and bumps into Richard at the hospital. Meanwhile, Meredith tries to find someone to take care of the kids so she can visit Derek for the weekend, and Amelia shows Stephanie some tough love when they work together on a case”

This episode looks like it is going to be a great episode and you won’t want to miss it, so be sure to tune in for our live coverage of ABC’s “Grey’s Anatomy” Season 11 episode 11 at 9 PM EST! While you wait for the recap, check out a sneak peek of tonight’s episode below!

On tonight’s episode of Grey Anatomy, April and Jackson learned their son has Type 2 of his condition and unfortunately further testing has also shown that even know (while baby is still in April) the baby’s bones are breaking. So, regardless of what’s best for them; the couple has finally made a decision about what they want to do next and they’ve decided to put their baby first. And they can’t let their son continue to be in pain.

So April is going to induce her pregnancy and while they might not have long with their son (Type 2 rarely last more than a couple of hours) – Jackson’s mother had advised them to still name their child and make sure they’ve gotten to hold him at least once. Catherine had returned this week to help her son and daughter-in-law process their grief. However, April it seems is still holding out for a miracle.

She has it in her head that if she prays long enough then maybe god won’t take their baby away. And because she feels like this – she’s rejecting all other possibilities. Including her child’s imminent death.

Meanwhile, the rest of the hospital were soon made aware of what was going on with the couple but did their best to give them space. So April and Jackson weren’t forgotten – in fact several of the doctors even prayed for them – yet a hospital couldn’t shut down because the doctors wanted to support a friend.

Bailey and Callie had to deal with a gunshot wound and it turns out their patient was 9 months pregnant and didn’t know it. So not only did they save their patient’s but Callie also had to deliver a baby.

And the strangest thing has been going on at the hospital lately. There seems to be an intern deliberately messing up and none of the doctors have noticed.

Files aren’t turning up, urine samples are being left out in the open, and this “intern” even rejects accepting paperwork. She had simply given Alex the “evil eye” when he tried to give her something and he was just too busy arguing at the time to catch it. Apparently, Meredith wants to visit Derek in Washington and she needs someone to watch the kids. Hence, she went to Alex but it seems Meredith doesn’t want it to be Alex and Jo that’s watching her kids. Just him!

So he was arguing with her about it when he completely overlooked the intern. The same intern that’s admittedly kind of creepy when she sneaks around the hospital.

As for April and Jackson, well, initially they were set on a course but then April started to second guess their earlier decision. She told Jackson that if they truly expect a miracle then they shouldn’t have given in too quickly. They shouldn’t have doubted God.

And that’s why she changed her mind. April later decided to hold off on inducing her pregnancy. Because, like she said, the God she believes in wasn’t wrathful or cruel.

Jackson, on the other hand, doesn’t want to raise her hopes. So he’s been honest with her. And some would say bluntly so. April, though, ignored him and returned to work.

Owen said he didn’t need her but he ended up being wrong seeing as April was the only one that recognized the intern (the same giving trouble) and knew she didn’t work at the hospital. The intern was actually a former patient at the hospital. It appears she had come in with her fiancée after an accident and when the fiancée died – she didn’t know how to leave.

So April calmly talked to her and she helped this woman come to terms with losing a loved one. And once she had done that – she told Jackson she would go through with her own ordeal.

Subsequently, helping someone else face their fears helped her face to her own as well!
April gave birth and she held her son until the longest moment. However her miracle never came. So April and Jackson said goodbye to their baby. And the hospital mourned with them.

Callie and Bailey had kept a family together after ensuring both mother and daughter survived their ordeal.

Amelia taught Stephanie a harsh lesson about being a doctor and how they can’t go about offering their patients any reassurance.

Richard was able to be there for Catherine when she needed someone to hold her.

And Meredith left town for a bit after she had left her children in Maggie’s capable hands. But next week, the same Maggie that helped her soon will be demanding answers. Because, even though Meredith packed lingerie in her bag, she never visited her husband while she was away.