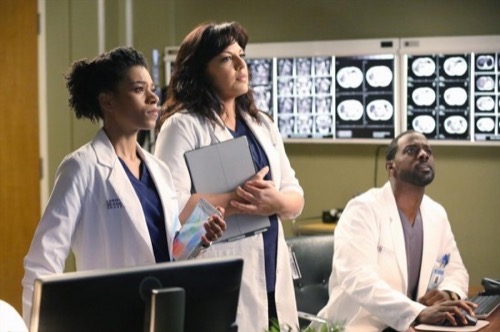 On the last episode, Amelia operated on Dr. Herman as Stephanie assists her and a crowd of doctors observe, but the surgery proved to be more challenging than she expected. Meanwhile, Bailey was leery about Arizona tackling one of Dr. Herman’s cases. Did you watch the last episode? If you missed it, we have a full and detailed recap right here for you.

On tonight’s episode as per the ABC synopsis, “an earthquake shakes the ground at Grey Sloan Memorial Hospital, trapping Maggie in an elevator and threatening Meredith’s long streak of successful surgeries. Meanwhile, Owen gives medical advice to a child over the phone and Ben confides in Jackson”

This episode looks like it is going to be a great episode and you won’t want to miss it, so be sure to tune in for our live coverage of ABC’s “Grey’s Anatomy” Season 11 episode 15 at 9 PM EST!

The hospital was struck by on an earthquake on tonight’s new episode of Grey’s Anatomy and, unfortunately, it was then up to the doctors (both the proficient and the unprofessional) to clean up the chaos it had left behind. And, funnily enough, life was actually going well for some before the quake hit.

Apparently, before the earthquake, Meredith had been on an abnormal streak. At least for a doctor anyways. Because according to Jo, who’s been following her closely this entire time, Meredith hasn’t lost a patient since last November. However, all of that can change in the blink of the eye because of the new circumstances.

A patient came in with his family after he and his future stepson fell off their snow lift when during a planned a ski vacation. It was an unavoidable accident and yet the Meredith’s patient had to deal with a teenage daughter on top of his injuries. And the girl wanted to be blame her future stepbrother for her dad’s accident. So Meredith found herself having to deal with someone else’s family drama for once.

Meanwhile, April and Jackson are back at work full time but while Jackson seems to be readjusting back to his old life – his wife is freakishly calm. And what you can take from this, is that April is refusing to talk about her feelings and is in fact coming off as a tad brusque whenever someone (like her friends for instance) try to approach her. Other than that, though, April has been doing a good job at work. And, later, she even came to Owen’s defense when he needed someone.

A young girl named Ruby had called the hospital after her mother collapsed during the earthquake and was unable to get back up.

But Owen had no idea where she was or what condition Ruby’s mother was in. So he needed help and April offered to try and help the police in locating the girl. And Amelia and Richard offered to help Owen attempt to treat Ruby’s mom over the phone.

In order to save her mother, Owen was going to have to ask Ruby to do a whole sorts of things including inflating her mother’s collapsed lung. And something like that required sticking a smores spear into her own mother’s chest. But afterwards she had to follow that up with doing chest compressions.

The guys talked her through everything but eventually Ruby phone died because of low battery. And after that she was on her own until help finally arrived.

It was an excruciating wait but Ruby and her mother were helicoptered in at the hospital. And apparently all their hard work paid work. The doctors, with Ruby’s help, kept Ruby’s mother alive until she was able to get professional help.

But then not everyone was as professional as Owen or as his team.

Maggie had her own patient that needed her help and she was going to deny the woman to chance to live an as normal life as possible all because of her own fears. You see this patient was elderly and technically didn’t have that much time left. Yet this patient wanted to Callie to perform a hip replacement in order for her to comminute her high-flying dating life. And for some reason that was a trigger for Maggie.

Maggie was recently asked out by a Tech at the hospital and she turned him down. She later told Callie that she just doesn’t click in relationships but Callie called her on it. She told Maggie that being fearful means she’s never taking a risk. Their patient, however, is her own person. And she just wants to enjoy life.

So that inspired Maggie to change her mind about Ethan. And she agreed to go on a date.

Ben also ended up changing his mind but it wasn’t about his own life. It seem all he needed was a talk with Jackson because by the end of their conversation it finally dawned on him that he is going to have a sister. And he can’t make up his sister’s mind for her.

And once Meredith found out about her streak, she at first felt bad. Because do you know what happened last November? In case you forgot that was when Derek left to go to DC. So Meredith in the end found she actually was doing better without Derek.

Yet, in spite of that, she knew she still wanted her marriage. So she called Derek in hopes of catching him on a break and instead she got a woman. As in a woman was answering his personal phone and then said woman refused to identify herself before hanging up.