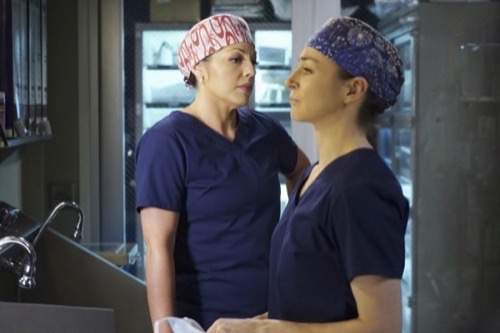 Tonight on ABC Grey’s Anatomy returns with a great all new Thursday May 14, season 11 finale titled “You’re My Home.” On tonight’s episode, in the 11th-season finale, the doctors are busy dealing with the aftermath of a disaster, which bonds them as it reminds them about what to prioritize in life.

On the last episode, the doctors of Grey Sloane Memorial Hospital were forced to put their emotions aside when a catastrophic event occurred.

On tonight’s episode as per the ABC synopsis, “as the doctors continue to tackle an unfathomable crisis, they are reminded of what is important and brought closer together, on the season finale.”

This episode looks like it is going to be a great episode and you won’t want to miss it, so be sure to tune in for our live coverage of ABC’s “Grey’s Anatomy” Season 11 Finale at 9 PM EST!

That couple, the one that were involved in the horrific car accident but were still expecting a baby, are now parents on tonight’s all new episode of “Grey’s Anatomy”. And one of them was still trapped in the car.

Keith couldn’t be removed at the scene because there was high risk he would be bleed out. So the doctors had taken one look at him and had to write him off. Essentially, they knew they could save him and so didn’t bother sticking around. However April stayed.

She knew they could keep their patient alive and that he would have a better chance at said survival if they got him closer to the hospital. Thus she had him and the car wreck loaded on a tow truck and literally brought him to the hospital. And after that it became the doctors’ jobs to perform a miracle.

But as it turns out the new family was going to need more than one miracle.

Joan, Keith’s girlfriend and baby mother, had hurt herself while she was in the interns’ care. An intern had opened her collar when he wasn’t supposed to and that put her at risk of being paralyzed. Luckily that hadn’t affected her when it came time for her to birth her son but later began hemorrhaging. So both of the baby’s parents were at risk.

And despite the real trauma going on, the doctors at the hospital were still being their selfish selves. Richard and Catherine were fighting about who was going to be the next Chief of Surgery. Yet they weren’t even being discreet. They had a big blow up right in front of everyone.

Plus their argument was a waste of time. It was the board’s decision that decided who the next chief would be. And Richard had no right telling Bailey that she had the job when there’s a possibility the board would vote otherwise. Baily was already congratulating herself and celebrating with her husband when the position remained up in the air.

And, though it did not come off as a shocker, Alex was still amazed that Jo got upset with him when he told her that Meredith wanted to move back in.

It made her feel like the roots Alex wanted to put down wasn’t in fact with her. So she told him to go ahead and move the widow with three kids in but don’t expect for her to be happy with his decision. And Alex tried to reassure her. Yet Jo needed time to think about what she wanted.

Meredith was butting in and Jo knew she couldn’t stop it. And to be fair, Jo didn’t even hear the full story. So she had no idea that Amelia moving was also a possibility when she said she needed time.

Though Meredith simply wanted space for Amelia. Apparently she missed the part that she had to be a supportive sister to her sister-in-law. Thus she wanted to make up for it by inviting Amelia over to the house. And that way the other woman didn’t end up technically homeless when she sold her house.

And as for Richard, Meredith tried to help as well. She played the dead husband card, knowingly, and told them they were wasting time by being angry at each other. Also for Richard, how many missed opportunities was he going to have?

Meredith’s mother passed away and Adele his wife went down the same route. So Richard is running out of chances.

So is April and Jackson for that matter. April has found her calling and unfortunately it’s being overseas. And while her husband wants to support her, he did that for the last year and not once did his wife ask him how he was coping.

Hence he doesn’t know if he’s going to be around if or when she comes back. And that means April has to make a choice. She could either stay and work on her marriage or she could risking losing Jackson for good.

And after the chaos had calm down, and the young couple were safe with their baby, everyone had to put on a smile (whether they liked it or not) for Richard and Catherine’s wedding.

But, in the end, Jo found a way for her and Alex to be together. It seems she found a place they could buy together and she wants them to put down their roots. So the house can be returned to Meredith and her kids. And Alex can have his fresh start at the new home.