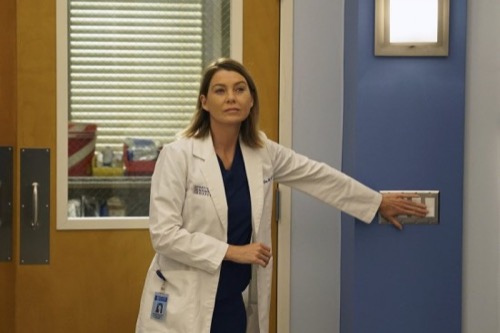 On the last episode, as the doctors continue to tackle an unfathomable crisis, they are reminded of what is important and brought closer together, on the season finale. Did you watch the last episode? If you missed it, we have a full and detailed recap right here for you.

On tonight’s episode as per the ABC synopsis, “in the 12th-season opener, Meredith adapts to new roommates. Meanwhile, Jackson gets ready for April’s return; Bailey battles to be chief of surgery; and two young patients propel the doctors to reexamine bullying scenarios from their own pasts.”

This episode looks like it is going to be a great episode and you won’t want to miss it, so be sure to tune in for our live coverage of ABC’s “Grey’s Anatomy” Season 12 Premiere at 9 PM EST!

Two girls were hit by the train on their way to school. Jessica had apparently known a shortcut but was simply not fast enough to make it off the tracks in time. And as for the other girl, she had seen Jessica in trouble and had tried to push her out of the way.

Or so Jessica had claimed when she first was brought in. Yet Callie noticed that both girls had the same drawn tattoo on their arm and that meant they knew each other even if the only one that conscious was denying it. So Callie went back to Jessica and she asked the young girl for the other’s name. Without it they wouldn’t be able to notify the girl’s parents.

And Jessica admitted that girlfriend’s name was Aliyah. They had wanted to be together so bad that they had formed a suicide pact.

But, despite what they both girls did, they survived the initial accident and they were merely topics of discussion earlier when Jo arrived late that morning blaming some jerk for messing up at the tracks. Jo and Alex had moved out of Meredith’s house last season and it seems the commute is what’s getting to her.

However returning to Meredith’s house is out of the question. What with her kids, sister, and sister-in-law, the place is just overrun. And Meredith is already on the brink, after a mere couple of months, of evicting Amelia.

The two women have been fighting over literally the smallest things. Like milk or coffee. Yet “the wall” appears to be their biggest problem. A while back they had discussed taking down a wall so that they could have an open concept and admittedly most of the discussion had happened when their under the influences. So it came as a bit of shock for Meredith to find her Amelia one day taking a sledgehammer to their wall.

So the ladies were still fighting about that at the hospital. Until Owen mentioned that “the wall” might be low-bearing and thus should not be taken down.

But the case they were on ended up taking a lot of the time they would have otherwise devoted to arguing. The two teenage girls that stood in front of the train had been trying to kill themselves in order to avoid getting separated. Jessica had later revealed her parents had wanted to send her away to a special camp. One they hoped would “fix” her. So the train was the only way they could prevent Jessica being forced into changing.

Callie had eventually run into the parents seeing as she was operating on Jessica of the two girls. Yet they refused to listen to anything she had to say. In their minds, they were right to take her away from bad influences. Like Aliyah.

And these same parents, better yet the mother, who took great pleasure in informing Aliyah’s single parenting father about his daughter. Apparently he hadn’t known that his daughter was a lesbian. Though for the most part it did seem that he took the news better than they did.

His daughter, on the other hand, had suffered a setback in the OR. Aliyah had begun to bleed out on Meredith’s table and the doctor was at her wits ‘end. Luckily, the woman that had come in to interview for the job as chief had also been overseeing the surgery and she was able to talk Meredith through the procedure.

So this new woman was good and seeing her in action made Bailey question whether or not she wanted to apply for the same position. But she had a husband. And Ben pushed Bailey when he saw her giving up on herself.

Therefore, when Bailey was trying to decide how to push herself ahead, she came up with the idea to conduct her interview right there in the OR. She felt the board need to see her at work and know that this job wasn’t merely a challenge for her like it was someone else.

And that is how Bailey made a compelling case.

Yet there was someone else at the hospital that needed to make a tough decision as well. Jessica’s father hadn’t been as adamant about the camp as his wife. So he was having a moment of reflection meanwhile his wife had gone off on a resident.

The wife was the one that didn’t believe Maggie (a black woman) was a doctor. And, in spite of it actually being Callie that had gotten into her face over this whole camp business, that woman chose to get into Maggie’s face when social services had been called on her. So Maggie did the one thing she had never done back in school – she stood up to the bully and punched that woman in her face.

And at first she was jubilant. But then she had to think about it and the repercussion that would naturally follow. So she knew she had to apologize.

Only, Maggie never got the chance to do so. She had approached the other woman and was just about to when Jessica’s father finally decided to stick up for his daughter. He told his wife that she was not going to be suing anyone. And that if she didn’t drop the camp thing and simply accept their daughter, he would leave her and make sure she never sees their daughter again.

So, in the end, Jessica was given the chance to be herself and she even got her parents’ permission to see Aliyah.

However, while families have come together, another was falling apart. Jackson and April was avoiding each other. She had come back from overseas and the first place she went to was the hospital. That place she was hoping to spend the night. You know rather than at her own place. Yet the hospital was a no-go because Jackson had already picked it for himself.

He was going to sleep there so that he didn’t have to see her at their place. Therefore the first time this married couple ran into each other – they said whatever they had to postpone an eminent fight.

And speaking of fighting, Maggie finally sat Meredith and Amelia down. Then she got to a place where they could take down the stupid wall together.