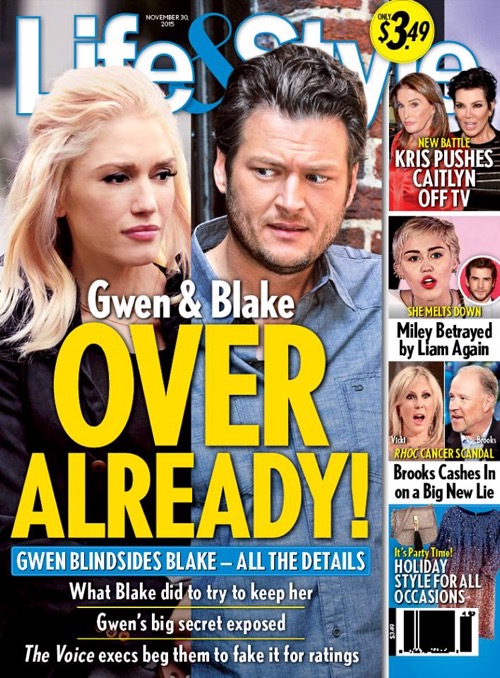 We were just finally starting to get used to the idea of Blake Shelton and Gwen Stefani dating, and being the first official “The Voice” couple. But, rumors are already popping up claiming that Shelton and Stefani have broken up. We’re not totally buying that “The Voice” coaches have split though – especially since they were just packing on the PDA this week for everyone to see during the live singing competition on NBC.

This week’s cover of Life & Style Magazine features a photo of Gwen Stefani and Blake Shelton, the headline screams “Gwen & Blake Over Already – All The Details!” The L&S cover goes on to tease, “Gwen Blindsides Blake. What Blake Did To Try And Keep Her.” Of, and of course “The Voice” producers are begging the couple to keep the charade going because it is doing wonders for the show’s ratings.

After Gwen’s rep confirmed that she and Blake Shelton were dating the night of the Country Music Awards, Gwen backtracked a little bit in an interview and tried to downplay their relationship. That seems to be Life & Style’s “proof” that they broke up. Apparently, Gwen was concerned that dating Blake could affect her custody case over her three children with ex-husband Gavin Rossdale.

An inside source dished to Life & Style Magazine, “Gwen was feeling overwhelmed. She found all the attention surrounding her and Blake to be too much and regretted how soon they made their relationship public.”

All of the press and tabloid covers probably is very overwhelming for Gwen Stefani, Blake Shelton, and Gwen’s kids – and that is exactly why we think that Gwen and Blake’s relationship is solid. They aren’t “new” to the Hollywood scene, the couple knew that confirming they were dating would cause a media frenzy – the fact that they went ahead and did it only proves that they were confident in their relationship and were ready to face the music. Don’t worry “The Voice” fans, we don’t see Blake Shelton and Gwen Stefani breaking up any time soon.